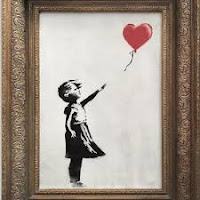 Meet Banksy, 45, a Brit who's got the art world talking about him.  In October he stuck his picture, "Girl with Balloon," in his shredder, cut the canvas into ribbons and while he selling the ribbons, it sold at auction for $1.4 million.

This is one of his self portraits as a lawbreaking vandal, political activist, provocateur, who upsets  people with his satirical street art and epigrams that combine humor with graffiti--all of it done in his distinctive stenciling style. Banksy says, "The poet produces poems, the painter produces paintings, the criminal produces crimes. If you can do all three at once, you can really confuse the shit out of them."

This guy defaces homes, street corners and walls, stenciling pictures in odd places. A famous 3 x 4 ft  Banksy that's at the top of a tall building cannot be seen unless you climb ladders. You can't see his "Grim Reaper" stencil unless you take a boat trip. Without getting permission, he'll create a stencil on your house. A ramshackle house with a Banksy on it will sell for millions.

So where can you go to see one of his works? The New York Times says, "At the Brooklyn Museum one of his artworks was surreptitiously placed there by the him--a soldier in a red coat holding a can of spray paint, with anti-war graffiti in the background. The Museum of Modern Art has a stencil of a can of cream-of-tomato soup that was found in an elevator. They're not sure it's a Banksy so it's not on display. 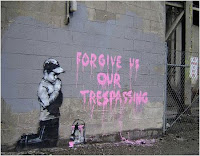 Banksy's last face-to-face interview took place in 2003, but I found this wall stencil with a 45-ish, ordinary, balding guy who looks like he's discussing it. Bet it's him.

"Pest Control" is the name of the organization set up by him to control his business. He says, "It has never been easier to sell one's art. You don't have to go to college, drag around a portfolio, mail off transparencies to snooty galleries, or sleep with someone powerful. All you need now is a few ideas and a broadband connection. This is the first time the essentially bourgeois world of art has belonged to the people We need to make it count!"

The shredded girl picture, auctioned for $1.4 million in 2018, is now worth double.

Attending auctions or interviews, he wears a paper bag over his head.  Protected from negative reviews, intellectual discussions of his art, as well as negotiations, Banksy is clearly a super, successful artist whose work we will surely be seeing in various major museums through out the world.

...that paper bag over his head...what a wonderfully appropriately creative, perfect self-portrait...