Click any item and you'll see another clock with specifics that you can click to see a smaller clock with more specifics. Here's what the numbers were when I started writing this on February 8th. 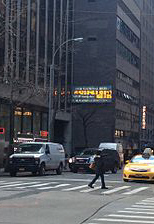 The Clock is a billboard-sized display which constantly updates to show our current gross national debt and each American family's share of the debt. It's in NYC, on the western side of One Bryant Park, west of Sixth Avenue between 42nd and 43rd Streets.

(Except if you visit my hometown today, you won't see the sign. It's being moved to a fancier new building in that area. I never noticed it; money has never been my cup of tea, but it intrigues my husband, John Cullum whose Dad was hoping John would get into real estate and money lending instead of acting.)  Anyway, here's what I've gathered from various online sources.

WHY DOES OUR COUNTRY OWN SO MUCH?
The federal budget, every year since since 1970 has a deficit. Last year it was $666 billion. Experts say it will be $30 trillion by 2028. Janet Yellen (the retiring Federal Reserve chair) told Congress in November that the debt could become unsustainable -- "It's the type of thing that should keep people awake at night."

WHY IS THIS A PROBLEM
We pay interest on this debt. The Congressional Budget Office (CBO) is stopping Obama's post recession stimulus campaign, so interest rates will rise steadily in the coming years -- probably it will triple by 2027 when the Government will be spending more on interest payments than on national defense.

IS EVERYONE WORRIED.
No. (Gee, I am.) Economists say deficits and debts are mostly irrelevant. Since the government can print its own money it can pay or not pay off its debts. Other experts tout what's known as the "Modern Monetary Theory," explaining that inflation is the only thing standing in the way of the government printing and spending as much money as it wants.

WHO OWNS THIS DEBT
About three-quarters is held by investors in treasury securities that are sold by the government to raise money. Some is coming from the government borrowing from trust funds like Social Security and Medicare, which means we (you and I) own most of the debt along with corporations, state and local governments and individual investors who hold treasury bonds in their retirement funds. Our biggest foreign creditor is China, (second biggest is Japan). If the U.S. damaged its credit rating it would be a seriously bad problem but currently "American Debt" is considered a one the world's safest asserts.

HAS THE US ALWAYS BEEN IN DEBT?
President Andrew Jackson briefly paid it off in 1835 with proceeds from land that the government stole which belonged to the Native American Indian tribes. The U.S has been in debt beginning with the cost of the Revolutionary War. The debt peaked in World War II days, sank afterwards. It's been rising since then -- peaked when government spent heavily to avoid economic collapse during young George W Bush's days with his $700 billion bank bailout, and again with Obama's $787 billion economic stimulus package.

WHAT CAN BE DONE TO PAY IT OFF.
Spending less and collecting more in taxes. But voters don't want spending cuts or tax increases, and politicians who want to be elected avoid them.

Dems and Repubs are inconsistent in their views on this. There's a lot of talk about Bill Clinton's debt and what it did to senior Bush's debt, and what his debt did to Bush junior, and what Obama did, but Repubs who now have both houses, embrace the deficits, arguing that their 1.5. trillion tax plan will pay for itself by generating economic grown, (even though economists say that's not realistic.)

Hey guys, even if what to do about the debt inconclusive, irrelevant, unrealistic and you, like me, can't picture  trillions -- you could wrap $1.00 bills around the Earth 81,258 times with the debt amount! If you lay $1.00 bills on top of each other they would make a pile almost $1.5 million high! That's equivalent to 5.93 -- six trips to the Moon!

Yow! In the time it took you to read this page what we owe has gone up, up, up, WOW -- here's the National Debt Clock NOW