At one-hundred-and-four, Ida Keeling, is a very busy lady. 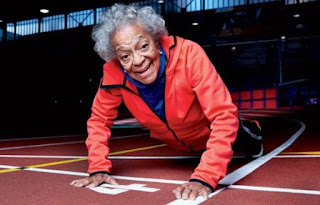 She grew up "Happily," she says, as one of eight children in Harlem. The days when police opened the hydrants with with sprinklers on them, there were wonderful times--dancing to drum music, (boys made pails into drums). But drugs came--everyone was after the quick money that killed both her sons in drug related violence in 1978 and 1981. Their deaths broke her spirit. She was 67 and began running. Ida says: "The more I ran, the faster and stronger I became. It released the hold that death had on me."

"Preparing for races--sprints of 60 to 100 meters--I'd go to the gym, ride my bike, work out. Age aint' got nothing to do with it. When you really want to do something for yourself, you go and do it."

There's a contagion of these youngsters nowadays. Another gal, merely 103, who just won the meter races in Albuquerque, says keep your mind on magic things. Her advice? Look for "magic moments" like sunsets, sunrises, rainbows, beautiful birds, music and people’s "lovely comments."

Wowy!!! These older women winners are wonderful philosophers as well!!!
Posted by em's talkery at 4:30 AM No comments: