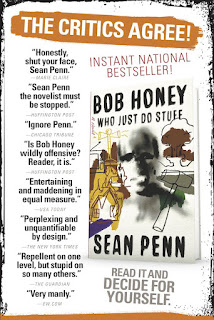 Here's an interview with Sean Penn, about his recently published  novel, "BOB HONEY WHO JUST DO STUFF."

Interviewer, Nate Hopper, asked: "The main character of your book is a mercenary who opposes a Trumpian figure. Do you share Bob Honey's point of view?''

Penn said: "I wrote this book to get myself away from my own world views. That doesn't mean they are not expressed in this book. It's up to the reader to decide."

Interviewer: "In this book, he (Bob Honey) drafts a letter to the Trumpian character, saying "We are a nation in need of an assassin.  Are you worried that will be read as you advocating for the assassination of President Trump?" 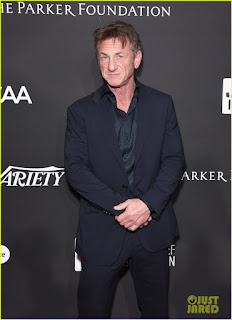 Penn: "I'm not worried about that. If anybody believes by reading this that I am advocating for something like that, then they are  not really getting that this is a satire. ..." (later referring to Trump) "His indulgence in his own flamboyance and minor brain is cheapening the air we breathe. I used the book to keep myself from [falling into] the worse thoughts that Bob expressed. When it comes to Sean Penn talking for Sean Penn these days, I even feel that I want to use less flamboyant language than I have, and I am not a politician."


"Bob targets the elderly.  Do you fear getting old?"

"No, I am in a hurry to get old. I've always that it in my head that I'm 77 years old. Now I don't know if I'll make it to that. I've done a little too much smoking. But I do feel more at ease with the world the older I get despite the fact that the world itself is becoming increasingly challenging."  (Sean Penn's actually 58.)

(He was a handsome 35 or 36 when we lived in Malibu. I often had a Starbucks coffee outside at one of the tables. I noticed Sean Penn at another table. He was staring at me. Staring back for a moment, wondering was he flirting--should I smile, say anything--I looked away--any trivial remark might seem as if I were a gushy fan flirting back. My husband, John Cullum, had actor-pals who occasionally sent flirty eye messages that it's best to ignore, so I quickly finished my coffee and hurried out.)

Interviewer Nate, referred to a lawsuit Penn recently settled, that insinuated in his twenties he was abusive with his wife, Madonna: "Has that experience affected your impression of "me too?"

"Yeah. I want it to win," Penn said, explaining that he hoped 'me-too' would take baby steps and not become media legislation of free speech. "The greater issue is that there are very serious changes that society needs to make to improve life for women, for homosexuals, for immigrants. Skepticism is more necessary and valuable than any blind belief anybody has about anything. No matter what issue we're talking about, I believe every black person can have a point of view on a white person that is legitimate to express. Every man who has a point of view on women's issues, it is legitimate to express, and vice versa. We've got to be a 'we' at some point. Once good intentions start forcing everybody into camps, the strategy is off. Then things get worse. If people take some kind of high ground. like only Danish princes can play Hamlet, they we've lost the joy of life."

I say Sean Penn IS "Bob Honey Who Just Do Stuff." You'll see Sean Penn just do stuff in this fascinating video that's turned me into a sincerely admiring SEAN PENN FAN.

(VIDEO) WHAT SHOW WOULD BE FUN TO DO AGAIN

John Cullum and wife Emily Frankel wonder if it would be fun to revive one of the musicals he starred in on Broadway--maybe "Shenandoah." 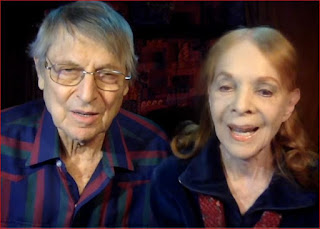 Kicking around pros and cons, they find themselves humming and singing a little. It inspires John to sing out phrases from some of his favorite songs from the show.