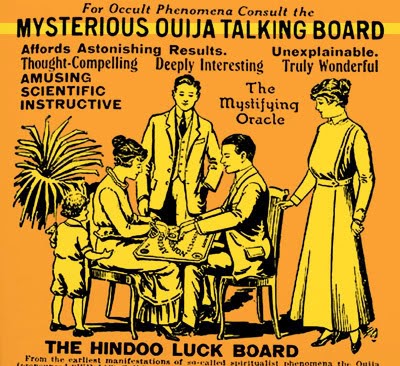 Should I quit being a blogger? If I had a Ouija Board, that's a question I'd ask.

I wouldn't take the answer seriously, but formulating a question is a way of rethinking things, and what you get from using a Ouija Board.

The ad which appeared  back in the mid 1800's, called it a magic device that answers questions about the past, present and future. It cost $1.50, at a toy and novelty shop. Though it wasn't "proved" to work, it began to sell very well.

It was, and still is a flat board with the letters of the alphabet arrayed in two semicircles above the numbers 0 through 9; the words "yes" and "no" in the uppermost corners; "good bye" at the bottom. 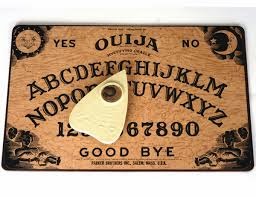 It comes with a planchette. a device you maneuver about the board, and watch, as it moves from letter to letter, spelling out the answer to your question, seemingly of its own accord.

Aided by stories about spiritualists, who called it the Elijah Board, it was an acceptable, even wholesome activity to contact spirits at seances.

The board's popularity boomed in the late thirties, after Brian Donlevy and Claire Trevor used it in the film, "Human Cargo."

An Ohio attorney, who was considering manufacturing them, asked his backers, while they were playing with the toy, what to call it. The letters O-U-I-J-A appeared, over the head of a woman player who was wearing a locket bearing the picture of somebody. When the players asked what it meant, the board said, "Good luck."

The first patent offers no explanation as to how the device works, but asserts that it does.  Today, even some psychologists believe that it may offer a link between the known and the unknown.

Various physicians and psychologists have said the players make the planchette move. The movements take place without the conscious will or volition of the individuals.

So, if I had a Ouija board, I would ask, "Should I keep on blogging or start a new novel? Will the world get destroyed by a bomb?"

Hey,  if you could ask a question right now, and rethink various important things, what would you ask Ouija?
Posted by em's talkery at 4:00 AM 7 comments:

(VIDEO) JOHN CULLUM ON DRESSING AS A WOMAN Emily wants to know what John does before every show, in order to transform himself into "Terry" -- the woman he plays in Harvey Fierstein's play  "Casa Valentina."

It fascinates Emily as John details -- head to toe -- what most every woman knows and does in order to look beautiful.