Our huge response to the wedding of Harry and Mehgan, the "Younger Generation of the Royals" got my attention, but I wasn't hooked on it the way I'm hooked on "London Bridge Is Down." That's the phrase in England for "D" day, the day the Queen dies -- the code name for her is "Mrs. Robinson." There are meticulous details for "D+1, D+2 and each day day after Mrs. Robinson leaves the world.

The planners envisage her passing away after a short illness. The doctor who controls access to her room will determine what information will be in bulletins. The Queen's secretary will inform the prime minister; bulletins will be sent to governors and prime ministers of 15 governments outside the UK and 36 other nations in the commonwealth who will be advised to wear black armbands 3'3/4" wide on the left arm. The Guardian and the The London Times have 11 days of coverage prepared. Sky News and International Television News experts have already rehearsed what they'll say about her final hours. 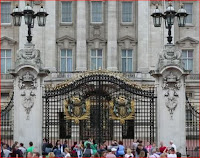 No matter where she is at the end of her life, the coffin will be taken to Buckingham Palace on the Royal Train. As the train progresses, people will throw flowers, bells will toll, flags will be lowered. On D+1 the central window on the palace balcony will be removed. After rituals and three blasts from Trumpeters, Charles will appear. The current Garter King of Arms will proclaim Charles as King Charles III, followed by a 41 gun salute, 7 minutes of artillery.

On D+2 and the next 9 days, Westminster Hall will be cleaned. Hundreds of candles will be positioned. Guard rails along the route will be put up. Traffic lights will be removed. Ten pallbearers will be chosen and begin practicing. Programming on BBC will be changed -- comedy and satire moved to BBC2. The Queen will be buried in a lead-lined coffin, weighing more than a quarter a ton.

On D +4, the orb, scepter, and imperial crown will be placed. With Charles leading the mourners, there will be a huge Military parade with the Royal Navy, Beefeaters, and Gurkhas Indian soldiers taking part. Four soldiers will stand guard for 20 minutes at a time, as people stream past the Queen for 23 hours a day, in a line that will be more than four miles long. Every day wreathes on the coffin will be renewed.

Before dawn on D+9 (the day of the funeral) the jewels on the orb, scepter, and crown will be cleaned. Shops, stock market, and most of the country will be on a day off. There will be memorial services in various soccer stadiums. Members of the royal family will arrive unannounced. Children and grandchildren (including women for the first time), will arrive at 9 a.m. Big Ben, hammer covered with leather pad, will ring with muffled tones.

Inside the hall there will be 2000 guests. No cameras will be visible. At 1 p.m. the country falls silent. Buses, cars, railroads stop. Inside the Abby, the Archbishop will speak. Pallbearers will place the coffin on the green gun carriage that was used for the Queen's father, and it will be pulled by 138 junior sailors. This procession, on the mall, will travel the 23 miles from Westminster Hall to Winslow Castle, where the royal household will be waiting.

Cameras will stop broadcasting. The lift to the royal vault will descend. Then, finally, King Charles III will reach into a silver bow and drop a handful or red earth from it onto the coffin.

The coffin will descend. 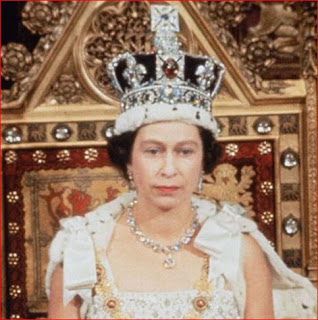 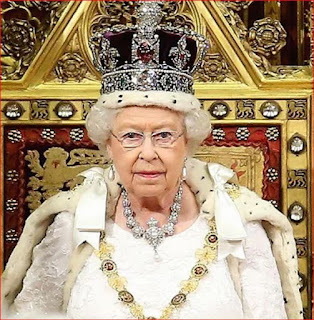 I think we will feel this death and mourn her as a beloved ruler, deeply affecting our culture as well as the world. Who in America is, for us, like the Queen? I will always remember -- never forget -- the day Barack Obama was chosen to be a candidate, the huzzahs, the huge, incredibly excited, marvelously massive crowd celebrating. Will we ever feel that way again? Since the election, for me, my beautiful America -- amber waves, purple mountains, power, glory, land of the free with her welcoming arms -- has changed. Will it ever be beautiful in that way again to us again?

What will happen in London hasn't been seen in London since the death of Winston Churchill back in 1965. Perhaps, like the UK Guardian says, "The Queen is perhaps the U.K.'s last living link to the nation's former great power."

I guess that's why I'm writing about "London Bridge is down" and Mrs. Robinson leaving the world.


My blog is based on an article by Sam Night, in UKGuardian, March 2017.