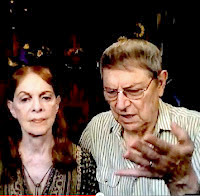 HURRAY FOR ART IN PHILLY

Golly, it's wonderful to see art --ART that makes me want to drink in the colors, the mood of this painting -- "Large Bather's By The Sea." It was painted by Cezanne in, 1906. 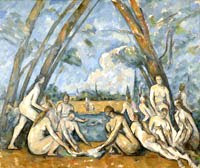 The show at the Philadelphia Museum of Art is called "Visions of Arcadia Over the Years." Arcadia -- in music, painting, and theater -- has come to mean a mystical place of harmony and contentment, a paradise.

The Museum in Philly brought together three great painters who lived around the same time -- Cezanne, Matisse and Gauguin.

This is a Gauguin.

When he painted this in 1898, Gauguin called it, "Where Do We Come From. What Are We? Where Are We Going?"

This inspires me to say, loud and clear, I don't want to see artist Damien Hirst's spots, his animals in formaldehyde, his diamond skull. and be told it is "great art," and how many millions Hirst's art is making.

I can't bow to current art critics, or the heads of various museums, and take their words as truth about what is good. If what I'm looking at evokes no feeling or reaction except "gee, what is this? why is this here?" I stop looking.

I'm not selling this to you. I'm just telling the truth about how I feel about art and artists right now. For me, the mystical world of harmony and contentment doesn't exist anymore. Bathers? In seas polluted by residue from the killer earthquake in Japan? Beaches ruined by the last horrifying oil leak? The few untouched beaches are horrifically crowded with too many people yearning for a happy time in the sun, despite what we know about sun rays and cancer?

Hey, we are living in a world where every day there are revelations of bad stuff -- poverty, wrong-doings, innocents murdered, political doings chock full of hate -- hate in the air, which is polluted we're told.

Okay, I like Picasso --he never ceases to amaze me. I don't love Andy Warhol's works, but I sense his search and like that he "talked" in his art works about the world he landed in. Yes, I'm confused and bored by Rothko, but I'm glad that I've got these painters to view. And I'm glad, oh my, I am glad -- so very glad we've got Cezanne, Matisse and Gauguin at the Philly museum, along with Henri Rousseau.

Rousseau's' last painting is also on display there. He painted 350 paintings. This last one is "Dream," first exhibited in 1910, a few months before he died.

Ah, the dream of that dream touches me.
Posted by em's talkery at 4:00 AM 6 comments: 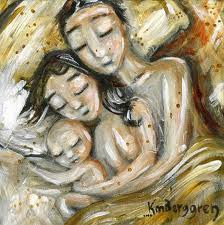 Cuddle means to hold close for warmth or comfort or in affection; to lie close, or snuggle, or nestle.

Moms cuddle babies; lovers cuddle; teenagers sometimes cuddle; cats and dogs cuddle; birds do it; other pets snuggle. I know from nature movies and visits to the zoo, that other animals cuddle.

I think, based on my own experiences, that cuddling is something you can do to make you feel calm, safe, less stressed.

If you’ve been with your loved one, your partner, for a long time, as I have, the calm, safe feelings comes with holding hands, or a quick kiss. Sometimes I visit my husband while he’s working, and rub his neck while he’s typing, or slide my arms dow 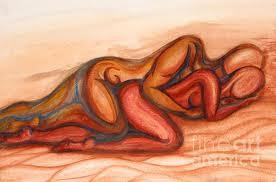 n his shoulders carefully, so as not to mess up his work.

But cuddling, or being cuddled, by anyone else -- an acquaintance, or a stranger wouldn’t be pleasant, calm, safe, or soothing. It would be weird.

So when I saw this video clip – (it’s sort of like an advertisement made by a girl in her twenties, who will cuddle you for $50 an hour) – well, I blinked. I laughed and started wondering if this girl isn’t going to get slammed, severely criticized, shut down by police or some city agency when the complaints start piling up.

She isn’t licensed. Are rules posted? And gee, what about clean sheets, pillow cases, toilet and washing facilities? What happens if a client wants more than cuddling? What does she do if things get get weird?

Is cuddling a new way of earning money in these depression times? Is this a job you’d consider doing?

Hey, maybe this whole thing is a fun idea by an adventuresome, clever girl who wants to be famous. She’s figuring the video will go viral, or someone will make a big fuss – the media will grab it, and she’ll grab a great fifteen minutes. 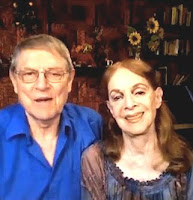 Though John Cullum loves to watch sports, Emily rarely sits through more than a quick look at the score.

Em wonders if he watches to root for the team, or because he has favorite sports heroes -- like Federer, Nadal, and Djockovic in Tennis.

John names his hockey, football, and baseball heroes, and explains why he admires them. He's amused when Em prompts him -- she not only knows the famous big names, past and present, but also most of the latest gossip about them.