Emily Frankel gets John Cullum to reveal who he talks to in his mind. 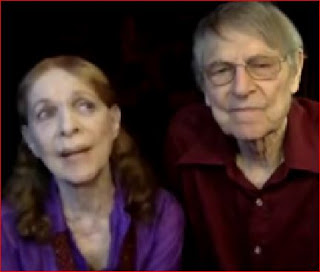 That's what I often look like as I watch films on our bedroom television set.

I am not sure what the actors are saying.

For instance, if leading characters are arguing -- it sounds climatic and I do hear a few words -- I find myself supplying appropriate dialogue, based on what I have gathered thus far about the story that's unfolding.

Quite often, more often than I like to admit, it bothers me -- sometimes characters whisper, or it's just bad
pronunciation, or the actors get so deeply into what they're feeling, they don't pay attention to pronouncing words clearly -- they just let words run together.

I can't blame this on our TV set. News and commercials are clear. But it's seriously annoying. Quoting Shakespeare's Hamlet, I tell the television, "Speak the speech I pray you as I pronounced it to you, trippingly on the tongue; but if you mouth it as many of your players do, I had as lief the town-crier spoke my lines."

The other day, in desperation, I fixed the settings on our television to display captions. The dialogue appeared in a white strip with each word easy to read. It's somewhat distracting from the story that's unfolding, but it helps.

Maybe it's just as well that I am missing dialogue -- the stuff I am not hearing is stuff I don't want to hear.

Hey, maybe, probably, the dialogue I am inventing improves the film!

I turned off captions.  Now, I simply murmur --