GLORIA STEINEM ON "ME TOO"

Gloria Steinem's affect on our culture is huge.

These questions were asked by NY Times Journalist, Abigail Jones. Gloria Steinem's replies (somewhat cut down by me) reveal that nowadays Steinem doesn't push or sell what she personally stands for. In the 70's Steinem, a journalist herself, became the face of the woman's revolution, founding "Ms," a magazine by and for women, tackling domestic violence, reproductive rights, equal opportunity--all the issues that became known as women's lib. Now, at 83, no longer a revolu-tionary, Steinem's ready, willing, and able to advise us on how to handle what she considers the inevitable change that's happening, glad it's happening, as she tells us: "Be who and what you are."

HOW IS "ME TOO" DOING?
"I see a level of activism that I have never, ever seen. Wherever I go, I see people who weren't voting before and are now running for office, or who didn't know who their congressional representative was, and are now lining up outside their offices to lobby them. (She refers to President Trump awakening people, who were going about their lives without paying attention to the government.)

CAN YOU ELABORATE ON HOW TRUMP HELPED THE MOVEMENT?

"What once was an invisible experience without a phrase, sexual harassment, then was a phrase without a law, and then a law without a national conscious-ness, is now available truth telling, with some possibility of being believed for the first time. We're beginning to see the scope of a system of male dominance that's intertwined with race and class. We're beginning to see how much sex has been distorted by power."

HAS "ME TO" MADE YOU RETHINK YOUR OWN PAST EXPERIENCES WITH MEN?
"I'm remembering when I was 30, sitting on a couch in an office with a (male) acquaintance. The acquaintance reached across and took hold of my wrist to kiss me. I bit him on the cheek drawing blood. I didn't think about it! I'm not suggesting this was a virtue on my part. I still had my instincts. It made me realize to please, to be obedient, to not make trouble hadn't been cultured out of me. We have instincts like my cat. My cat will not put up with anything because she has never had that instinct oppressed out of her."

HOW CAN WE ENCOURAGE THAT INSTINCT IN YOUNG PEOPLE?
"We are most likely to encourage it in girls and boys by listening to them--what are they interested in--what do they like to do? That's how we know they're worth listening to. Encourage them to do it on their own. Not help too much. Provide a community of support. In some ways girls have become dependent because they are not allowed to be independent. It's partly just saying "You like to do that? Do it!"

WHAT HAVE YOU LEARNED THAT'S CHANGED YOUR OWN BEHAVIOR?
"At a minimum, you can model the behavior you want to strengthen by not shouting and yelling. I do think that we, as women, trying to please, need to be aware of the problem sometimes. When presented with 500 people ready to do something, and 100 people say no, women will try to persuade the 100 rather than move forward with the 400. Sometimes I can hear myself saying "You don't agree with me? Let me explain it to you  again." Instead, say, "Thank you very much," and move on to something positive.

WHAT'S YOUR BEST ADVICE FOR YOUNG WOMEN, POLITICAL AND OTHERWISE?
"Don't listen to me, listen to yourself. What do you love to do so much that you forget what time it is when you are doing it? Find support for that. Find other people who will know how to do it better, that you can learn from. Don't worry about the shoulds. Get up in the morning and do what you can."

Guys, friends who are reading this, if you want to see the uncut full version of what she said, click Newsweek Article.

I have to say I love Gloria Steinem's tone, and the down-to-earth, marvelously practical advice she's giving us.

Would you want to change places, and be John Cullum and Emily Frankel in front of a camera making a video? 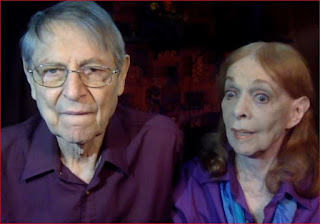 After a nightmarish morning with many interruptions about things that urgently need fixing, the Cullums find themselves unable to figure out what to discuss.