There is something about Ellen DeGeneres -- a glow? 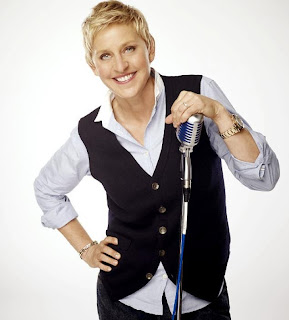 What is it? Is it the way she relates to everything that you see around her -- be it a chair, pillow, glass, or the hoots, the applause from her audience, and the guests entering? It's never the same but I feel -- yes, feel -- Ellen reacting to whatever she's seeing.

Why do I invariably -- even when I briefly glimpse her as I'm tuning to the news -- pause and watch her, hear what she's saying?

Okay, I've wondered if this indefinable something has to do with her coming-out as a lesbian. Back in 1997, when she was in the television series, "Ellen," she came-out on "The Oprah Winfrey Show" -- told the world "I am a lesbian," just after an episode in which her character in the television sitcom came-out to a therapist played by Winfrey.

It was a big WOW. In those days, it could have caused her to be dropped from the show, or caused DeGeneres to fade as a popular TV personality. It didn't. Her series went on to explore more lesbian things. And since those days, Ellen DeGeneres has received more than a dozen Emmys and many other awards for her television work, and her support of many lesbian and gay issues

But that is NOT why I'm writing about her.

You can Google her, and be amazed at the number of shows, films, important events she's hosted, and performed in, but that indefinable something about her -- perhaps it really is a glow -- her eyes, smile, posture, the way she moves, the way she phrases a sentence -- makes you feel you know her. And whether or not what she says, spur-of-the-moment, is funny, or even seriously serious, it always seems as if what Ellen says is right, the right thing to say.
.
Maybe it's Ellen DeGeneres's background? Born and raised in Louisiana; a Christian Scientist till she was age 13; Mom a speech therapist, Dad a insurance agent; parents divorced. Ellen moved with Mom to Texas; graduated high school; briefly attended the University of New Orleans where she briefly studied communication; worked as clerk, saleslady, waitress, house painter, hostess, bartender -- used all of that as material when she was doing comedy at coffee houses and small clubs, inspired by Woody Allen and Steve Martin. She toured nationally, starred on TV's "Newhart" and "Carson," and was the first comedienne on Carson's show to be asked to sit down and chat with him.

I can't compare her to anyone else. I can't evaluate Ellen DeGeneres as an actress; or performer, or famous woman, or a starry star.

Why? Because there's no one like her.  She's somehow become an American personality with whom you want to visit, like our Statue of liberty -- she's OUR Ellen. 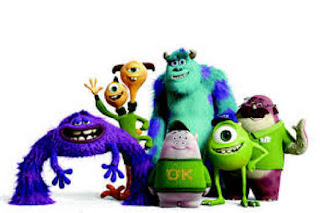 Visions for kids who will grow up to be the vision creators for your kids' kids, and their children.

I wrote about Shrek.

He reminds me of nasal sprays -- the repulsive congregation of Mucinex cold germs ho-ho-ing, cavorting, proudly beating their chests,

Just the other day I blinked, gulped, laughed, and cringed at the fabulously awful monsters in "Monsters University." I know kids and their parents love them -- parents are probably proud of their kid's delight in most of the ugly e jokes -- it shows that their offspring are smart, sharp and very possibly on their way to being winners when they get out in the world and take over running the country.

Oh no!  Oh yes -- these kids will go on to become another generation of artists like the brilliantly creative artists who create blockbuster films for Pixar, Disney, and DreamWorks. And the kids will become even more expert with toilet humor, farts, curses, crude "up yours," and down-playing, of tenderness, love, respect kindness, innocence... and, and ...

I can't help remember Olive Beaupre Miller's books,  that my oldest sister had in her attic room. 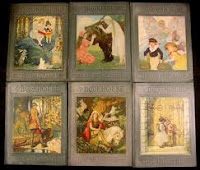 I could only "read"  on special occasions when my sister was present, making sure I wasn't going to  wrinkle or dog-ear any pages. 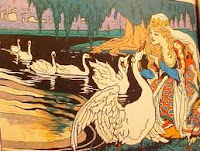 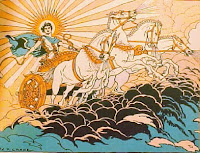 Oh sure, I looked at comics  -- liked the "Dragon Lady," "Smiling Jack," and "Little Orphan Annie," but when I draw, or write, in my mind I see those illustrations ... that castle.

I climbed, and climb and search, and keep finding more marvelous doors and windows in that castle ...

After you take a look and fall in love with this hippy-dippy furball monster, please -- please find a way to  show the kids the castle.