Hey, I am not attached to any healthy living stuff, gurus, therapy, or religion. I just do what I do sometimes better, sometimes sort of ho-hum -- housewife routines, write, post a blog on Facebook, tweet, make videos with my husband, and dance around in my studio.

Seeing this photo in Time Magazine -- sun rays through giant trees -- distracted me, got me reading an article on forest bathing. 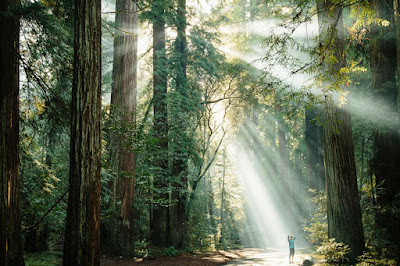 That a forest heals -- that listening to it, smelling it heals seemed a sort of ill-fitting juxtaposition. But ever since the eighties, Japan has been touting SHRINRIN-YOKU -- forest bathing. Time reported that quite a few Japanese educators and scientists are currently looking more deeply into substantiating with facts, what really happens to the body when people spend time with nature.

It listed studies that were done: EXPOSURE TO IT CAN INCREASE AWE,  IT PROMOTES CANCER-FIGHTING CELLS, IT HELPS WITH DEPRESSION AND ANXIETY, HELPS  WITH WITH ADHD SYMPTOMS, EVEN FAKE NATURE HAS BENEFITS.

One expert, testing a small group, proved with numbers that spending time in the forest induces a state of "physiologic relaxation." Another study by biologists from Tokyo's Medical Center found that trees and plants emit aromatic phytoncides, compounds that spur biological changes. Participants in this study stayed overnight in the forest, and exhibited changes in blood that are associated with better immunity, and lower blood pressure. Other studies confirmed and clearly linked nature to symptom relief for heart diseases, depression, anxiety, and attention disorders. All the studies showed that quiet atmosphere, beautiful scenery, good smells, and fresh clean air in a forest contribute to good health. 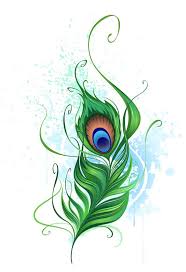 "Fake Nature" also has benefits -- listening to nature sounds over headphones has been shown to help people recover faster from stress, that's why many spas employ nature sounds in their treatment rooms.

Hmm...why not consider this idea and go for a walk in a forest-like area...?

Hey, I can't rearrange my life in order to take 40 minute walks in New York City, but I've watched this video twice -- it made me a little sleepy, maybe I'll watch it again ...

The blight is THERE. It isn't hot news, but one of these days the media will probably get us worrying again -- they'll grab onto the somewhat altered, softened facts, and reveal some new scary detail.

Here's a recent photo of some of the 7000 workers working night and day at the nuclear plant. 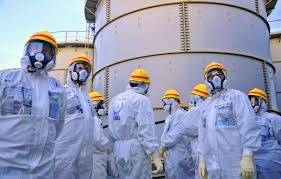 The Fukushima Daiichi disaster occurred March 11, 2011 after an earthquake and tsunami swamped the generators. Four of six nuclear reactors on the site experienced a total blackout. Three of them melted down, spewing enormous amounts of radiation into the air and sea. It is the worst nuclear disaster since Chernobyl in 1986.

The Japanese government has not abandoned Fukushima like the Soviet Union did with Chernobyl. It is cleaning up the contaminated areas. Initially, we were told that the cleanup would create 22 million cubic meters of low-level radioactive waste and return some 80,000 nuclear refugees to their homes.

In September 2015, just one of the eleven towns in Fukushima's evacuation zone reopened. 1000 evacuees returned.

Since the day after the earthquake, Tokyo Electric Power Company (TEPCO) has been dismantling the Fukushima nuclear power plant, employing thousands of cleanup workers. The head man, Naohiro Masuda, says it will take three to four decades. There still is no technological solution for removing, scooping out melted fuel from the mangled reactors. A mistake could cause a disaster locally, as well as worldwide.

At first TEPCO poured seawater into the overheating reactors but the reactors and turbine buildings were filling up with thousands of tons of highly contaminated seawater. If workers stepped in a puddle they got radiation burns immediately. Today, though there are no longer puddles, TEPCO, circulates 320 metric tons of water per day into the reactors to keep the melted fuel cool. Currently, there are 1,000 tanks containing more than 700,000 metric tons of contaminated water -- that's equivalent to nearly 300 Olympic-size swimming pools, and TEPCO is building more tanks -- the millions of tons of radioactive water cannot be discarded in the ocean.

How is this affecting the rest of the world?

Germany is phasing out nuclear energy. China announced that it suspended its nuclear expansion program, but China has 24 reactors under construction. In the U.S., scientists examining the effects of the Fukushima disaster, found little to fret about, but recently there have been headlines about a nuclear plant leak threatening drinking water in Florida; during the past six months, the New York Times has been calling attention to serious problems in the Indian Point Nuclear Plant, that is 45 minutes from downtown Manhattan. 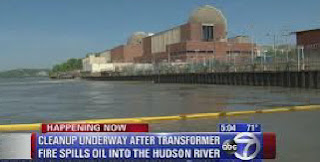 There have been nine incidents in the last year -- radioactive leakage into the groundwater that gradually enters the Hudson River. Four of the leaks resulted in a temporary reactor shut down. Andrew Cuomo, Governor of New York, is seeking a permanent closure of the plant.

Obviously, we'll continue to worry about Fukushima as $57 billion will be spent on trying to clean up a blight that continues to threaten our world. I will continue checking on the latest news, and report on what's happening.
Posted by em's talkery at 4:00 AM 3 comments: