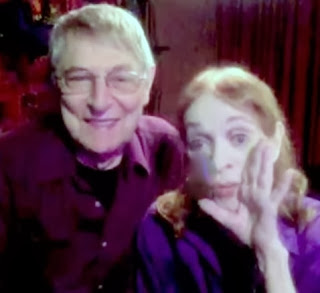 Em teases John about his address book. It's something he's worked on for years, constantly re-formatting, looking for ways to make it more effective.

Em mentions the wrong addresses, the names in his book of people who are no longer in the world.

His address book is actually a history of his social life, and dear friends who have passed on who are still alive and important to him, as well as his career.

Larry Page -- 40, is the successful, much admired respected CEO and co- founder of Google -- one of the most successful, ubiquitous and increasingly strange companies on the planet. I am bowing to Larry Page -- not reverentially -- my fingers are crossed.

How did this powerful guy come to be what he is? His dad is considered a pioneer in computer science and artificial intelligence. His mom is a computer science professor at Michigan State University in East Lansing, Michigan, where he was born. As a wee child, on into boyhood and teenager years, he was hugely encouraged by Dad to have fun with inventing, and playing with technological things.

For fun, at the University of Michigan, Larry created an inkjet printer made of Lego Bricks. After graduating with a BA degree, while trying to get his MA degree at Stanford University, and also working on his PhD dissertation, he pursued more of what he loved. Nicknaming his project "BackRub," exploring the mathematical possibilities of the World Wide Web, he focused on links. And bumped into fellow student, Sergey Brin. In 1998, Brin and Page founded Google.

Undoubtedly you've heard of Google, and used it. Google is essentially in the search business, but so much more. It is in the online-advertising business, mobile-operating-system business, the Web-browser business, the free-e-mail business, the driverless-car business, the wearable-computing business, (eye glasses), the online-map business, the renewable-energy business, and the business of providing Internet access to remote areas via high-altitude balloons. Google's corporate strategy is mainstream services, and risky long shots.

(It's not the risky long shots that get me.)

Incidentally, not much is known about his private life -- he's married to Lucinda Southworth, who continues to work as a research scientist -- they are have two very young children, and live in Palo Alto, California. Larry has had a vocal cord problem for 14 years that makes his voice soft -- sort of toneless, unemphatic. Maybe that's why, when he's making a speech, (and I've listened to a lot of them before writing this), I find it difficult to concentrate on what he's really talking about -- be it a complex idea or his philosophical concerns with it. But being a Google user, oh boy, I feel the affect of Larry's philosophy -- it's a passion -- Larry Page wants to explore areas that have not been explored.

Yep. this guy likes to head ahead of the trend. He sees far, far into the future, and it pays off. As of October 2012, the Bloomberg Billionaires Index lists Page as the 27th richest man in the world, with an estimated net worth of $21.1 billion. (Forbes in September said his net worth was $24.9 billion).

Okay, so why are my fingers crossed?

He screws me up with what he's doing with Google tools. For weeks, I've been adapting to the "new, better, more efficient, faster" -- new way of doing gmail. I have adapted. It is not better, more efficient, faster -- there's a new looking page that's got lighter print, not stronger larger easier to read print, and now a bunch of similar, boring icons (no words) to tell you how to save, print, insert links, etcetera. (In the Google help forum where people discuss their problems, many other Googlers, like me, are annoyed with the new gmail.)

Google blogger -- everything I learned to do and have been doing for five years -- space, insert, embed, save-copy-share -- all my safe practical routines have had to be relearned. Dammit Larry, I feel like a sheep led into the pen -- shorn -- naked -- back in beginnersville.

Meanwhile, as I keep dodging Google Circles (Google's latest attempt at social networking -- a waste of time like Google Buzz, that, thank God, has disappeared).  And I'm suffering on YouTube -- new owner Google has new ways, new displays -- each time I sign on, Gooigle suggests a new name, insists I explain why I don't want to change my name, or advertize, or amalgamate my channel with other Google channels.

And now there's this on the cover of Time. Google has announced Calico.

The latest new thing -- (out there, far beyond Google's driverless cars, and eye glasses) 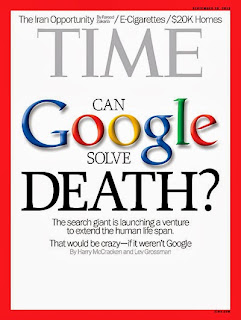 -- Google is digging in and around and under and below why and when we wither, wane, wizen and die.

Will Calico soon be watching, nagging, sneaking into my daily routines of everything that has to do eating sleeping breathing, so that I can maybe grow older and older for an extra 10 or 20 years?

Scoogled was a word used by Microsoft in their ads, attacking Google for answering search questions with "facts" that were ads for Google products.

I'm inventing a word for what super creative Larry Page will be Lego-stacking up around me, while he's Larroogling my life.

Here's  a brief look at Larry addressing a crowd September 20 of this year.

Ever thought about getting a robot -- buying one, using one, renting one -- for your business or home?


Robots are already doing quite a few jobs that humans usually do. There's a bartender robot mixing drinks in Ohio in less time than it takes a human; the University of Chicago library has a librarian robot that sorts books faster than a human. The Department of Defense at the pentagon recently acquired "Atlas" -- a 300 pound robot with arms, legs, head, torso, and hands -- that uses tools -- and can do 28 hydraulically actuated tasks.

Will the Military ever get robot "boots on the ground?"  Probably, Google (the do- everything-better-faster guys) has just sold 2,500 of its robotic, driver-less cars, to Uber Taxi service. Soon, in 10 cities you will find yourself being chauffeured by a machine. Hey, Doctors are operating with the help of robots. IBM's Watson, the robot that became famous on TV's "Jeopardy" when it beat the winner, is now absorbing case histories at Memorial Sloan-Kettering, helping with treatment recommendations.

What about something for YOU like a pet? Here's the latest dog, "Zoomer," that wags its tail, recognizes you, and you can teach him tricks.

If a cuddly, realer pet is what you'd prefer, here's "Leonardo."

What about robot playmate, a brother or sister for your kids?   Wow -- the more realistic face -- the skin covering the machine's head -- they say the skin   feels like real skin if you touch it. Ever seen ads for "Roomba," a $700  robot that cleans the floor?  iPilot, the maker, developed "Ava," a robot secretary with pad and pencil;  that inspired the development of "Roxxy," a "sex robot" which Bell Labs manufactured -- a 5'7" 120 pound robot with an articulated skeleton, synthetic skin -- it can be programmed on a laptop to respond to the owner's likes and dislikes. When Roxxy was announced at $7,000 to $9,000 plus a monthly fee, it garnered 4000 pre-orders but in researching how many subscribers Bell has, I bumped into the "Receptionist." . Aiko, the young man who created the Receptionist," has been refining her for the past five years. Click Aiko's projects -- see how this Robot has become the love of his life.  (It spooks me -- it's gotten me wondering what's next?  Soldiers to fight our wars?  Robot families caring for human families? Hey, will I have a robot some day to write my blog? 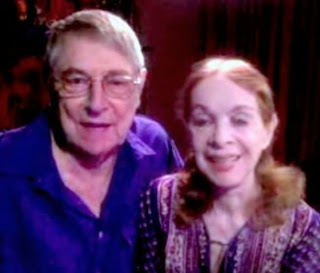 John, reeling off titles of shows he starred in, mentions that he'd like to have done "Kismet" and "My Fair Lady."

Em reminds him how entranced he was with Rex Harrison's performance. Pretending to be a  producer, Em "sells" the idea that John could play the part now.