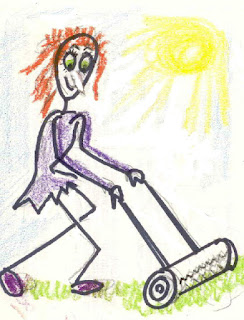 It brings back memories of our lawn after Daddy mowed it. My older sister got to mow it sometimes, and then, finally, I was allowed to push the lawn mower. It was fun. It was hard to get the mower rolling, but wow, once I got it going I didn't want to stop -- I loved making a pathway in the grass.

A twig got stuck in the cutter blades. I had to figure out how to get it unstuck. Almost immediately, it  happened again, and again -- twigs, pebbles, more twigs.

With all the stopping and starting, mowing became a big chore. I was glad when my sister told me, "You aren't strong enough to mow the lawn, Em."

Even so, that sweet-sweet smell -- it meant summer, no school, long days with me free to do whatever I was in the mood to do.

Free -- what a feeling -- that feeling as if every day were Sunday. It made me aware of time passing quickly, grass re-growing, needing to be mowed, which meant soon -- too soon -- the summer would end and the wonderful green would turn yellow and brown.

Yes, newly-mowed grass means green, sun, sweat, blue sky, sleepy wonderful freedom. I no longer remember who said I had to learn to rake it up. Raking the remnants wasn't fun -- fun was in the precious, sweet smell.

I got too-too busy and didn't see or smell any grass for a long time.

Now, I never see newly mowed grass except in television ads. Even so, I remember -- oh my yes -- I do remember, that sweet, sweet, sweet smell and it still gives me a powerful feeling that has to do with loving nature for giving us the gift of grass -- taking it away -- giving it back to us every summer.
Posted by em's talkery at 4:00 AM 2 comments: 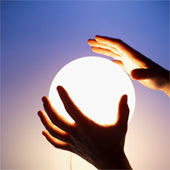