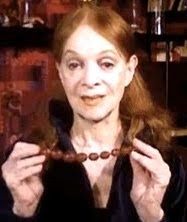 Here's me a few years ago, talking about my most favorite gift.

John Cullum is no longer in the show that I mention in the video -- "Scottsboro Boys," which was a cast, music, and a memory that stays with him. It's not the success of the show, but the family feeling he had with the actors, director, and stage crew, that he cherishes.

I feel the same way about my favorite gift -- it's  not very expensive, not very rare -- just a gift I was given in a light-brown manila envelope, stuffed with crinkled-up newspaper.

Why the gift is still my favorite, most cherished gift is not because of the way it looks, but what the giver figured out, and why the gift was chosen.

Could the President get mad one morning while watching the news and just push it?

Would anything or anyone be able to stop him?

The Los Angeles Times asking and answering that question concluded, "probably not."

Last month, Congress, after forty-one years of not dealing with this, held hearings to reexamine the chain of command that's involved with starting a nuclear war and learned that the President, to order an attack, has to call in the Military officer who carries "the football" (the brief case containing the nuclear codes), and transmit the orders to the U.S. Strategic command. A minute or two later, a barrage of nuclear missiles would be launched.

According to the Associated Press, General John Hyten, current head of the Strategic Command, said he would refuse the launch order, and stated that the order would be illegal. General John Hyten said it was not clear what would happen next.

Slate.com says the President could circumvent General Hyten's objections, and referred to the book compiled by military lawyers that contains legal justification for "almost any sort of nuclear attack that a president might want to order."

The Chicago Tribune, responding to the President's tweets about destroying North Korea, said that leaving this authority in the hands of one person has always been a risk. Referring to the fact that precedents were set up back in Cold War days when the Soviet Union could wipe out our entire arsenal with a surprise attack, the Chicago Tribune reminded us that North Korea cannot wipe out our arsenal; the Chicago Tribune told us that the Democrats have introduced legislation requiring the President get a declaration of war from Congress before ordering a first strike. Even though the Democrat's bill isn't likely to pass, the Chicago Tribune said, "For now, we'll have to hope that  Trump won't succumb to the temptation to press the button."

One kid is it; other kids gather around in a circle holding hands. The IT-kid passes through the group touching their hands as if he's passing the button, but no one knows who now has the button.

North Korea and nukes is one more life and death situation on the plate, while we are dealing with the shocking behavior of celebrity producers, politicians, reporters, (and our president), who have been given approval by us doing nothing about what's been going on for years.

What can we do other than hope -- HOPE the tweeter in the White House doesn't spur of the moment press the button.

All I can do right now is say that sentence louder, clearer!!!