On a huge green lawn in Montgomery, Alabama, sits the National Memorial for Peace and Justice, for people who were lynched. 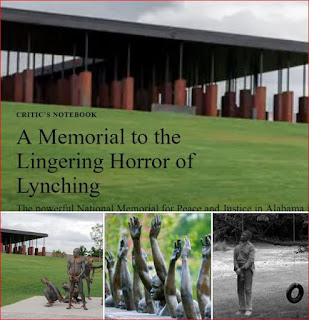 In the main building, proceeding down a grim walkway with 800 weathered steel columns hanging from a roof, on each column is the name of a county and the people who were lynched there, most listed by name, many simply as "unknown." The columns seem like the headstones. As you walk, the floor gradually descends till the columns are all dangling above you, leaving you looking up just like the callous spectators in photographs of public lynchings.

The magnitude of the killing is harrowing, more so when paired with the circumstances of individual lynchings that are described in brief summaries along the walk: Parks Banks, lynched in Mississippi in 1922 for carrying a photograph of a white woman; Caleb Gadly, hanged in Kentucky in 1894 for "walking behind the wife of his white employer," Mary Turner, who after denouncing her husband’s lynching by a white mob, was hung upside down, burned and then sliced open so that her unborn child fell to the ground.

Brian Stevenson and a small group of lawyers who were inspired by the Holocaust Memorial in Berlin, and the Apartheid Museum in Johannesburg, spent years immersing themselves in the archives of county libraries that documented thousands of lynching. Founder of the Equal Justice Initiative, nonprofit organization behind the Alabama memorial, Stevenson said, "Just seeing the names of these people, many never named in public--there's nothing like this in the county."

Thus far, they've cataloged 4,400. On the huge green lawn there are duplicates of each steel column arranged like coffins, names of persons lynched, where visitors often sit and rest. Could you sit there and rest? I couldn't. The awareness of so many people lynched, is overwhelming. 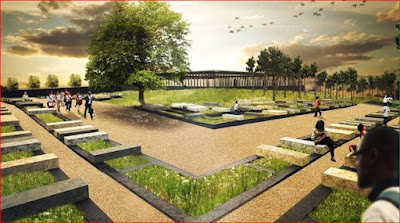