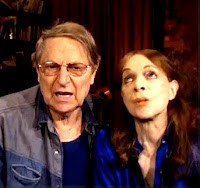 I no longer have time to make beautifully tailored shirts for John Cullum, But I can mend a tear, now and then, on a shirt sleeve or pajama sleeve. And, I can also iron a patch onto his favorite jeans. I must admit, I like to shop for clothes for him, and keep what he wears looking nice.

Every so often, JC (or I, myself) get intensely focused on fixing something -- usually something for our home, but all of a sudden, John got fixated on pens and pencils.

More than likely, the packages had been sitting on the store shelf for a year or so, because the pens in two of the packages didn't write.

And so our ink pens adventure began. John and Emily discuss how the ink pen's became significant.

"STAND BY YOUR MAN"

I was browsing, turning pages in one of my magazines, thinking there is nothing here I want to write about ...

The center pages fell open with "OBAMA'S COLLAPSING BASE" emblazoned across the middle of them. Heavy-hearted, because a lot of bad things have been happening, not been happening -- because of all the on-and-on talk about the deficit, I feel as if we're building a high wall around "progress."

Paying off the national debt is what the Repubs are selling, pushing, yelling about -- promoting because they ain't got nothing else they are promoting.

Also, a lot of conservatives, and seriously behind-the-times Americans think "Yes sir, we gotta pay off that national debt so my grand kids and their kids don't have to worry about it."

Of course, we may all be dead, or maybe the country will be a shambles, poverty-stricken, possibly non-existent, because we didn't take care of the environment, or people died from lack of food -- no money to buy it, no medical help.

And in the meantime, a lot of Dems are wavery-quavery -- they don't want to lose their jobs, but they're losing them because they haven't protected their jobs or stood up for anything. They're just sort of leaning toward the Repubs.

What can we do, what do we do, about all this, about EVERYTHING -- jobs, immigration, Medicare, health care, energy, environment, our wars, nuclear stuff, banks, Wall Street, rebuilding roads/railroads/bridges, our electric grid -- (have I forgotten five or six other things?).

We put Obama in charge and everything he's done, we have been wavering/quavering over, wiggling, testing, double-triple-questioning, based on the way we've been brain-washed into doing, since we elected him. We listen to the polls and hear the questions and pay attention to every Tom, Dick, Prick, and Harry. Get scared, and tentative, and the people that need to support the president back off a few feet and IN creeps doubt, compromise, alternates and more talk, talk, talk, talk, talk.

"Stand by your man," sang Patsy Cline.. We need to stand by him -- stand strong, and build a wall of support so that the brainy guy we picked to fix things can fix them. Yes, Obama's human. Yes, he makes mistakes, ("The only man who makes no mistakes is the man who never does anything," said Theodoree Roosevelt/)

He's cordial and kind and listens carefully to his opponents because, as a boy, he learned from his father daddy to listen to others, to empathize.

(Read the book Barack Obama wrote about this, for God's sake --"Dreams from My Father." He wrote the damn book and explained all this before we was ever a candidate).

Obama is empathizing with the Repubs and, and ... and ....... we are complaining and getting nowhere.

Yes -- . the big bad wolf-Bin Laden is dead. We suddenly think Obama isn't a wimp. Can we just for a few months, please shut up, stand by our man, OUR PERSON -- tell others to stand by our man, not argue and nit-pick. And support him and let him lead and win the next election and a Congress to implement some of the things that must get done if our country is going to continue to be a beautiful wonderful, healthy, peaceful, safe place to live?

WHO IS THE REAL GAGA?

Wait a minute, Gaga has how many -- nine million fans? That was the number yesterday -- it could be 10 million today. Her new album is out. She is praised and touted. She's won a pile of awards. (And she's just a twerp -- a kid -- most females her age are still fiddling around, experimenting, finding out who they really are.)

She recently appeared on Dave Letterman's show in a funky outfit -- super high platform heels, weird makeup, half-naked. And her naked parts didn't look hotsy-totsy perfect. Her bod looked okay, but didn't have the taut, toned look that a star's bod usually has.

Alright, I'm not an all-out, 100% fan, but the girl surprises me -- behind all the paraphernalia, she impresses me with her extraordinarily inventive outlandishness.

Like a 35-year-old, not a 25-year-old, her songs comment on what we say, think, do, praise, love, hate. She's seems to be a poet-philosopher, with her theme being "Us" -- the grownups, who made and defined the world that she landed in.

She doesn't attack Us, splatter Us with anger, or dismay. What she produces are theatrical, somewhat rueful, mocking, song-and-dance essays. Depicting what is acceptably normal and exaggerating it, she amplifies it into a fantastical, new dimension.

And within this dimension, she conveys that our rituals and traditions are ridiculous. It isn't satire to laugh at -- her song-poem-essays are theatrically exciting, sexual, spiced occasionally with rather shocking, gross movements.

Yes, Lady Gaga stops traffic in the way that Madonna did and still does. Gaga is at the top of the top-ten list, a super-celebrity, goddess, queen. She's got a huge fan base. True to her innovative spirit, she's built a reciprocal relationship with her acolytes, unlike that of any other pop music icon.

Gaga declares, "They are the kings, they are the queen. I am something of a devoted jester." (Imagine how weird that would sound, coming from Madonna, Kanye West, or Carrie Underwood.)

Calling them her little monsters, calling herself a little monster, (she has little monster tattooed on her left arm), she praises them and encourages them "to do stuff," tweeting, "You inspire me. Thanks to you I am what I am." Suggesting they can send her messages via You Tube, she said, 'I 'll let you know when they go [up], and remember you are all amazing, and I love you so, so much, I'll see you soon." (That is not the tone of a pop vamp flirting with her audience.)

Scanning the crowd of little monsters at a Gaga concert, you can see they aren't much younger than the Mother monster herself -- they're more like siblings. The sublime absurdity of this -- a girl in a see-through dress dispensing advice on how-to-become- who-you-are to her fans -- it's the outlandish, remarkably inventive Gaga doing her thing.

Then, every so often there's Stefani Germanotta. (her real name). When she is not performing, she talks about the world's problems -- DADT (don't-ask-don't-tell), the gay, lesbian and straight education network, immigrants, homeless people, homeless kids, sex, AIDS, Haiti, Japan, Alzheimer's, involving us and sharing her concerns in a remarkably simple, straight forward, down-to-earth way.

I have to say that I am stunned and amazed. I find myself standing back in admiration when I take a look at all of it -- all that this 25-year-old artist has done. 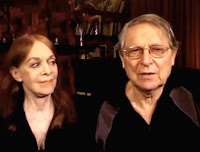 We called drinking and smoking "sinful" because it hurt John and affected me and our son JD, as well.

How did we manage to get John to quit?

What did JD and I say and do, what did John himself do, that worked? (And continues to work though John will admit, he misses smoking and sometimes, wishes he could have a drink.)