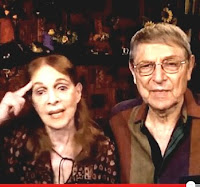 HAUNTED BY A PICTURE 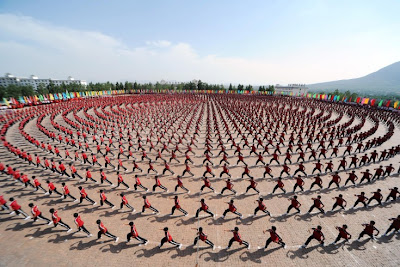 I saw this photo in TIME MAGAZINE -- a two-page spread. It horrified me.

I hate this puicture. I can’t stand looking at it.

I don’t want to write about the perfectly identical figures, the young people, who drilled and sweated and robotized themselves so they could do what they are doing.

Animals couldn’t do this. These are humans.

All my life I’ve strived to be me, be different, hold onto my individuality, help dancers I’ve employed, people I know and love, help everyone i know retain their identity, and NOT change to fit the mode.

I don’t want to write about about this picture, or or other horrors made by man -- man by himself, or men collaborating with Mother Nature.

Hey, the season is changing. I’ll write about September things -- cool days, cold days, are coming. There’s a convention to watch, and lots of stuff to do on my calendar -- taxes, building repairs, gotta check the thermostat and call the heat people to check out the furnace, get out winter clothes, put away summer stuff ... Whewy -- the list of things is like a snow ball, a mud ball rolling down a hill gathering up debris as it gets bigger, bigger. and bigger.

For more than a year the White House, non-functioning Congress, squabbles, fights, debates over what the country needs, have been filling my mind with what’s wrong, what’s getting worse. What a mud ball -- all that and now, the conventions, debates, rah-rah, lies, ugly attacks, money, money-men buying ads, disenfranchising voters -- that the presidency could be bought -- that election day is meaningless -- oh my God!

Hey, I’ll play a video clip, that will bring back the thrilling, stunning, horror of another horrifying ceremony.

I am not sure what I want to say about Tom Cruise or where my fingers are heading, as I mull over my up and down feelings about this very famous, "hot" actor.

Tom and Katy -- they were very hot news two months ago. Now they're sort of lukewarm. We've certainly wondered about them, ever since Tom jumped up and down on Oprah Winfrey's couch, declaring how much in love he was. If he was "acting"-- it was very convincing. Even now, we're still interested in tidbits about how she's doing and who he's dining with, or possibly dating.

I think we get strong opinions about celebs, based on an instinctive reaction we get, the very first time we see them -- it’s sort of like falling in love.

Cruise in his underwear, dancing, grooving delightedly, celebrating his freedom, his sexuality in “Risky Business” -- that so many friends were saying “he’s great,” turned me off. I don't go with what my neighbors think, but I couldn’t help myself -- I liked him -- he was cute -- and in the next film, the next, and the next -- well, I liked him more.

After “Top Gun,” “Born on the 4th of July,” and “Rain Man” -- films in which Tom revealed fascinatingly different aspects of the heroes he was playing -- I knew if the movie starred Cruise, it would be a good movie.

What’s a "good" movie? For me it’s one that gives me visions/impressions of people and sometimes places -- a drama that stays with me, like an adventure.

Okay, I have to say loud and clear -- Tom Cruise is not a Cary Grant -- one of my “number one” favorite actors -- a great-looking, always charming leading man, lovable, and humorous, even when what he played was villainous.

No, Cruise is not a number one favorite actor. I’m not sure why.

It’s not the rumors about Tom’s gayness -- hey, there have been rumors about Grant as well. Maybe it’s Tom’s passionate devotion to Scientology, though another one of my “number one” favorites is the magical, amazing John Travolta, who supports Scientology, and there’s “gay” talk about him also.

Scientology intrigues me and irritates me -- quite a few friends of mine (and actor friends of my husband, John Cullum), have become Scientologists, yet what they praise doesn't jibe with what I learned from friends who quit, and what I gleaned from reading the book by the founder of Scientology, L. Ron Hubbard.

Anyhow, Tom's excessive zeal for his religion bothers me, though the powerful visions he gave me from the films I mentioned earlier, plus "Color of Money," "Days of Thunder," "A Few Good Men," "The Firm" -- are favorite films that I’ve seen and enjoyed again, and again, and Tom Cruise is, most definitely, a superb actor.

Right now, with recent impressions from his "Mission Impossible" films, which, despite raves, mostly bore me, and Cruise in "Rock of Ages," which opened a few months ago after a huge PR build up, that praised his performance to the skies -- well -- he wasn't thrilling. The film was disappointing, got mostly negative reviews, and hasn't done well at the box office.

Is he slipping? Is he over the hill? Has he lost his looks? No. But it bothers me that Cruise and his PR people have been over selling his lengendaryness.

So why am I writing about him, and mentioning Travolta and Cary Grant as "number one" favorites? Well... maybe it's because Cary G and Travolta, no matter what they do, I grab it and hold onto it -- that’s all I think of -- that’s all there is as I’m watching the film and going with them wherever they go, as whatever they’re doing is unfolding.

Cruise is an extraordinary major, top talent. But ... well... I wish he’d stop trying to sell me on that, and be, just be what he is.

Here's a clip from "Rock of Ages." It was fascinating to see Tom as a rock star, but I somehow sensed in this role what I felt about Tom/Katy -- that maybe he was working too hard. What do you think? 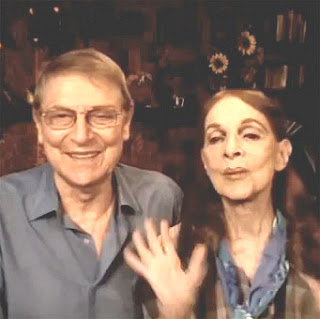 Emily Frankel, thinking sort of poetically, romantically about moonlight and stars as a favorite time, is surprised when John Cullum reveals his favorite time is morning.

It's also her best time, a favorite time, because the day's challenges can more easily be planned, and organized.

John Cullum's schedule, when he's in a show, requires an entirely different sort of schedule -- one that Em remembers from her days on the road doing one night stands as a dancer.

Acting or dancing, the performer must find ways to make the best time of the day between 7 and 11 p.m. -- transform it into a time of heightened perceptions, and physical energy.

Right now, however, doing what they are doing career-wise, John and Em agree, the best time of day is the morning.