(VIDEO) CULLUM'S GIFTS FOR HIS WIFE 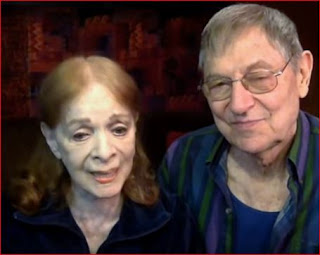 Whatever she mentions, John Cullum is off -- buying it, making it, or scrounging around to find where and how he can get whatever Emily needs.

This is Mike Lindell, the guy who invented MY PILLOW.

Using every aspect of himself, including his love life, family, and his on and off addiction to cocaine, alcohol, and crack, 47 year-old Mike is selling MY PILLOW in commercials -- lots of commercials, that are making him lots of money, making him into a kind of folk hero who's proving that the key to success is "name" fame.

With every commercial, we hear more of his private-personal story, with details emphasizing that he's exceptionally truthful, honest, and trustworthy, that he's working night and day to help people who don't sleep well, to sleep wonderfully well with MY PILLOW.

A story that's often told by Mike is how the MY PILLOW idea came to him, back in 2003 -- how he and his brother worked night and day for months, cutting up pillows into little, big, tiny, and huge pieces, arranging and re-arranging thousands of pieces till -- "miraculously" he says -- one day the pillow magically retained its shape.

He mentions proudly, actually brags about how much time he's bought on all networks -- on hit  shows, news and political shows -- meeting face-to-face with celebrities, anchormen, and big-name CEO's, as well as customers who are responding to his assertions. In commercials, interviews and mailings, he states that MY PILLOW can help you if you've got fibromyalgia, restless leg syndrome, sleep apnea, cerebral palsy, acid reflux, and other similar conditions.

Here's one of his 32-second videos.


Right now, busier than ever, Mike proudly announces that there are 18 stores in various states, and a new, 100,000 square-foot factory that opened in May in Minnesota, where workers are working 24/7 -- two lines of workers making pillows at a rate of 12 per minute -- producing more than 85,000 pillows a day. That's why he's buying more media for what he calls the MY PILLOW “tsunami” -- the next boom in sales, that will lead to My PILLOW becoming a billion dollar company.

Of course, a book about Mike Lindell is on the verge of being published; a film is being made about his life. In an interview, tears in his eyes, he explained that he's working on other products that can make life  perfect like MY PILLOW does. He mentioned a dog bed and a mattress top, telling us, "Pay attention to your dreams -- you too can maybe become a billionaire."

Guys, peeking at the Wikipedia, the Minnesota factory is listed as 70,000 square feet, producing 25,000 a day; the pillow is not magical -- it's a patented mix of different-sized pieces of open-cell poly-foam pieces that are chopped to specification by a machine -- the mix contains a resin that enables the foam to retain much of its shape when molded to the user's preference.

Wikpedia also detailed MY PILLOW lawsuit troubles: Lindell's paying a million in civil penalties to settle a false advertising lawsuit because MY PILLOW claims to help fibromyalgia, restless leg syndrome, sleep apnea, cerebral palsy, and acid reflux. The Better Business Bureau, having received a maximum number of complaints, has revoked its accreditation, and has given MY PILLOW and "F."

By the way, if you buy a pillow from MY PILLOW, it will cost you $79.98, plus shipping, free shipping if you buy two. There are quite a few other vendors that sell it for around $50, one that offers if for $19.99, plus shipping.

I am writing this blog because MY PILLOW wonderfully, perfectly represents what bugs me, what I hate and fear about advertising in today's media.  MY PILLOW isn't miraculous, marvelous, or a solution to sleeping better. Most of what is said about MY PILLOW is (my opinion) PREPOSTEROUS, phony baloney exaggeration, and lies -- lies created by the creator and people he's hired to help him spend enough money on selling this product, until you and I and millions, probably billions of others will want MY PILLOW.

My husband John and I have a big thing about MY PILLOW ads. When we're watching TV, and  Mike's face, or the MY PILLOW commercial appears, we cry out OH NO!!!

We quickly grab the remote and CHANGE THE CHANNEL.