What don't YOU want to think about, or discuss? 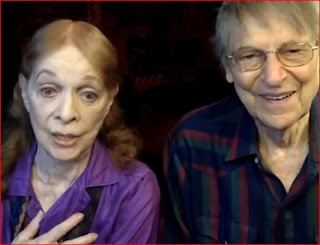 That question gets husband John Cullum and wife Emily Frankel sharing what's on their minds. Listing the things NOT to think about turns into an amusing exchange of fears and confusions.

I love this photo of John Cullum, my husband.

He's in his Rutledge, Senator from South Carolina costume for "1776," the film Peter Hunt directed. He's listening to John Adams, (played by William Daniels) and thinking about voting aye or nay when it's time to vote.

I love the look on John's face -- so real -- actor Cullum as Rutledge was thinking, planning, contemplating the issue, and probably also thinking about the song he was about to sing.

John told me that this scene in the movie had been done as a "master" long shot -- cameras and lights repositioned for the medium shot and filmed again -- the set up was again changed for the closeups -- he'd already sung "Molasses to Rum" twice. He told director Peter, "Better get it this time, I've just got one more "G" in me."

Wife, fan, lover of John Cullum, loves that photo of the man she fell in love with at first sight, the guy who had evolved from a very good-looking, handsome, leading man on a stage, a leading man who could rivet an audience -- into a man who could truly star in a show and draw thousands of theatergoers. I've probably seen the film more than a dozen times since it premiered in 1972.

Yes, wife Em WAS, IS always enthralled by this John in that moment, in that marvelous film, stunned by the power in him, artist, musician, singer, actor performer that he is, still is. Here he is, yesterday working on a video for a new project -- audio-videos we'll be publishing on our YouTube Channel & on Facebook. He studied the "take" he'd just finished. Even though I loved it, today he's re-doing it.

Hey, why am I jabbering about private thoughts?

I'm doing it to remind you that people with whom you are intimately involved change, grow up as you change, and it's amazing and wonderful, the way viewing them freshly grows you up too.
Posted by em's talkery at 4:00 AM No comments: