John Cullum and Em remember when they bought a second-hand television set, had to walk, rather than spent money on the subway -- days when they didn't even have money for phone calls.

They describe their first Christmas -- how they promised not to spend more than $5 on gifts -- how chuck steak meals helped them save money on groceries.

They explain how Emily, administrator of her newly formed dance company, managed to pay off a fine she got from the Internal Revenue Service.

ARNOLD'S UP AND AT IT AGAIN

He's showing us confidence, dismissing any criticism that says he isn't a great, trustworthy, good guy.

I'm shaking my head, and replaying the scene that must have taken place between him and his wife, Maria Shriver, after she learned he and her maid slept in Mrs. and Mrs. Schwarzenegger's bed and conceived a son.

That ain't INFIDELITY. That's utterly insulting -- total disregard for what they shared over a lot of years.

Could I recover from what he did? Could you?

Let's get to the heart of the matter -- the real feelings, not considering marriage vows,  commitment, and trust. What is a real relationship?

Hmm ... I've been divorced. I've dealt with infidelity. You become part of a person with whom you've spent hours, nights and days, good and bad events -- everything -- all that you and the other person have shared.

He done her wrong. But she knows who he is and what he is. She has a deep sense of the real man -- the child, the young man with the fantastically developed body, the immigrant to America. She knows what he dreamed.

Oh my, that dream -- he wanted to be the number-one, most powerful man in America, which means number-one in the world.

If you think beyond your own experience -- identify with him -- become that young guy, and feel how he strained and trained his body and soul; feel how he focused every single day of his life and developed his ability to succeed, to conquer and win.

If you disregard guilt, weariness, loneliness, fear -- the young man taught himself to blot out right or wrong, fair or unfair, and go for it.

That's a power that's rather unique. You don't meet men with that power often.

Have we ever seen Arnold really fail -- yes -- when he was California's Governor. But he didn't let what happened appear to be his failure. He managed to resell it as a success.  He was re-elected and served a second term. He often brags about how much of his own money it cost him, to help and rebuild California.

Who else do you know, who has the drive to get what I want no matter what -- that  winner mentality? What about the doping, record-breaking home-run hitters? What about Lance Armstrong? Tidbits of news suggest that Lance's cancer might have been brought on by his drugging, I am shocked and disappointed by his lies, but feel that his fight to stay alive motivated him to go for what he wanted any way he could. Yes, like Arnold, Lance made his body keep going -- forced his muscles to do more, better, harder, faster, stronger.

Perhaps what Arnold (and Armstrong) has in abundance, is an eye on the target -- the physical. and mental strength to go for the bull's eye.

Do audiences love him? Will those who love him flock to 65-year-old Arnold' in his new movie?

His other movies are terrifically exciting. The characters he played grabbed us. We can't help but  focus on him -- we're curious, enjoying the action, their amazing winning mentality, and the dead-on directness, the believability, of what he plays

I don't like Arnold Schwarzenegger. As a woman, I am insulted by his total disregard for his wife's feelings. I don't love the movies he's starred in or his acting, but I want to watch him. He continues to ... what?  Fascinate me? 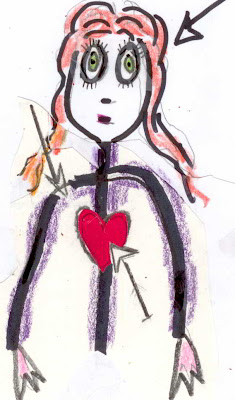 It's a sudden, sharp localized pain when:

A muscle you haven't been using suddenly hurts.

Somebody tries to help you climb up a step, implying that you're  elderly.

Your name is not on a list where you thought, for sure, you belonged.

It's a brief sharp pang of emotion, when:

EEK A sock (it's your favorite pair) suddenly  has a hole in the toe.  OUCH Your accountant says it's time to work on your taxes.  YIKES The letter from your landlord declares he's raising the rent. OH NO, NO! Some beloved. big name somebody is suddenly dead.

If a muscle hurts, USE IT.  If  you are insulted, LAUGH out loud, for 10 seconds.  If it's bad news, BLABBER all the cuss words you can think of.

If you're all of a sudden remembering old heartbreaks, losses, disasters, and major old wounds are festering -- SING:

Hey -- when stabbed through the heart say OUCH -- in English, Jewish, Pig Latin, Esperanto; or Spanish, and it will vanish.
Posted by em's talkery at 4:00 AM 9 comments:

(VIDEO) DO YOU PRAY? 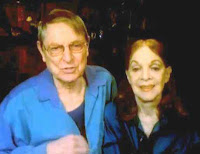 Emily reveals, that despite her agnostic background, she finds herself instinctively praying for help from "Dear God."

The Cullums realize that they both pray, in different ways.