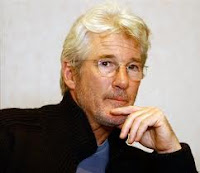 My husband, John Cullum, is the best -- best looking, most interesting, most talented, most versatile actor-singer-dancer, who can make me laugh, cry, cheer, and fall in or out of love with the person he's playing.

I love other actors also -- Cary Grant,  Dustin Hoffman, John Travolta. I've fallen in love with  Irons, Gibson, Hanks, Hackman, Beatty, and, if I stared into space for another minute or two, I'd come up with brief love affairs I've had with other actors, like Richard Gere.

I thought he was interesting the first time I saw him.

It was when John was in the musical "Shenandoah," at the Goodspeed Opera House, in upstate Connecticut, and producer Philip Rose was directing the first performances there.  I visited on weekends -- just popped in -- pulled myself away from my busy schedule in NYC, where I was hiring dancers for my Dance Drama Company.

I arrived at the train station around the same time Gere did on his motorcycle. He was dating the girl who was playing John's daughter in the show. He said, "Wanna ride?"  Hanging onto his waist, he delivered me to the theater.

I thought he was.-- hmmm  ... sort of rogue-ish -- messy hair, rough clothes, probably broke -- a sexy,  cute guy, who was playing around with a pretty professional actress.

He was flirty friendly.  He knew right away that I was worried about messing my hair.  He lent me his cap.  We had one of those fast, light chats one has with attractive strangers . What do you do? Oh, you're an actor?  What do I do? Oh, I'm a dancer -- I run a dance company.

My mind wrote a quick scenario -- he probably was thinking of taking acting classes -- the rough-diamond look of him was good.  I mentioned that making it in show biz was tough, that he ought to look for an agent.  When I introduced John to him, there was an embarrassing moment -- I didn't know the motorcycle-guy's name.

John already had fans -- guys and girls.  I thought my husband was spending too much time with the gorgeous  actress who played his daughter-in law in the show, so I was slightly sulking, looking at other guys like what's-his-name.

Yes, he was attractive -- not so much his looks, but my sense as a woman, that the guy saw ME. In the  brief, casual conversations we had in the course of the next weeks, he asked good questions about dancing and building a dance company. I remember thinking this guy likes women for what they really are.

Time marched on. I was surprised when I recognized him in "LOOKING FOR MR. GOODBAR."  He played the sexy, unstoppable killer who killed the leading lady.

Then -- wow -- I saw "AMERICAN GIGOLO."  I hadn't followed the motorcycle-guy's career, and only then, during the first scene of the movie, realized he was Richard Gere, an up-and-coming film star. The self-centered, vain, gigolo he was playing was, as a lover, remarkably tender, considerate, a lover who understood what his women clients wanted and needed.

I loved the man Richard Gere played in this film.

I loved the man he played in "BREATHLESS."  Not only did I enjoy the sex scenes in the film, but I also found the end of that movie -- his death scene -- brilliant and touching.

I loved Gere in "PRETTY WOMAN" -- his chemistry with Julia Roberts, and the story.  Personal friends have asked disdainfully, "You loved Pretty Women? You're kidding!"   My own son thought I was kidding. No, I'm not kidding -- each time I've seen "PRETTY WOMAN," I love the movie, I love the man, cheered for the man that Richard Gere played.

In other films, and there have been many others, each time I see Gere -- even when the role he's playing is a villainous, criminal, I LIKE HIM.

Richard Gere does something actor John Cullum does -- he finds the heroic aspect, the good  guy element in every role he plays.

Where is actor Gere heading now?  I think his need to express his personal beliefs -- his personal politics -- sometimes gets in the way of my feeling for him. And, of course, he's growing older -- he's not as handsome as he used to be.

Yes, my love affair has become a more platonic relationship, but I still have a crush on Richard Gere.

WHAT TO DO WHEN YOU DON'T KNOW WHAT TO DO

We haven't fully recovered from 5 days with no electricity -- no heat, no light. Even though the electricity has been turned back on, those 5 days still

seem like a nightmare. We're awake, but we find ourselves wondering where we're heading.

And  now, today we are recovering, from the November 6th  election.

For more than a year we have been bombarded daily with words -- words about how bad things are -- no point in my making a list of bad things, you've heard what I've heard. The bad things are still there. We are just waiting now, to see what happens next in Washington, D.C.

When my husband and I were in the dark for 5 days, we couldn't read by candlelight. We huddled in our green living room, sat below the skylight, and tried to read. I read through a play I'd written that's still on my mind, and tried to make cuts, hoping I could find the play's essence. My husband, John Cullum, read a play by Christopher Marlow, the playwright that many scholars think was, perhaps, as talented or more talented than Shakespeare.  While "working" we listened to the radio, wandered back and forth, in and out of the kitchen, nibbling on saltines, and popcorn.

We ate what was in the refrigerator -- Chinese food leftovers, two apples, two pears, and some of the stuff in the freezer that was thawing. We ate a lot of noodle soup with sliced potatoes in it, and hard-boiled eggs. I lit candles and did my daily barre exercise. John washed the dishes, and kept the kitchen clean. The bathrooms were too cold for showering or taking a bath, but the toilets could be flushed. We ventured down our dark, four flights of stairs, and went outside twice.  Everything was closed. The sidewalks and the streets were empty.

What was weird and still hangs over us is the boredom, the endless hours of being seriously restless, in a strange limbo where things we do everyday couldn't be done. We listened to station WNYC on a tiny battery radio. Other people who were affected by "Sandy" were calling the station,  and explaining how they were coping.

Each day as daylight started fading, we lit two candles, though we were concerned about running out of candles, and played "Crazy Eights," a card game.

In our area of Manhattan, the crisis is over.  We have lights and heat.  There's traffic and people on the street and sidewalks. We are back to doing what we normally do. John's a successful actor -- he's being considered and is considering other jobs.  I'm a writer  working on a blog. Today, we'll film a short video for my blog, and post it on AirBroadcasting, our YouTube channel.  Being self-employed, we're okay financially, but still haunted -- aware of how hellish it was for us, and still is for many, many people who are suffering, and still seriously impaired. The aftermath of "Sandy" has to be dealt with and will be dealt with as the days and weeks pass.

The election aftermath -- all those bad things on the list before the election, will be dealt with as time marches on. Will we, should we keep going over and over the issues, and wonder what Congress will or won't do? Or focus right now on ourselves -- work, habits, tidying things, shopping, social things, and family?


I'm thinking -- now is the time to figure out what's important, essential, the best thing for you. If you've figured it out,  or have been doing that for the past year or so, do it again. 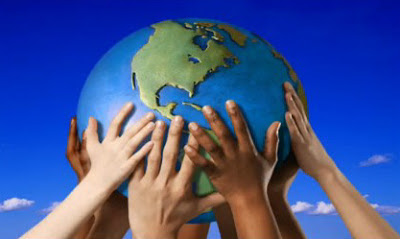 Oh boy, what a year -- it's been a year -- more than a year of endless campaigning.

Golly, where are we going to be, what will we be thinking. when our election is over?

On the other side of the world, here's what these guys were thinking.