SOMEONE I KNOW IS VERY ILL

Six months ago he said he had "acute congestive heart failure."

I started to write a letter to him yesterday. Stopped -- thought it ought to be a letter to his wife, explaining why he's special, important, significant to me.

But ... I'm not on intimate terms with him ... He was never a personal friend and I don't know her. What if I sent a get well card? Flowers ? A plant? A Bonsai tree in a glazed bowl, yes -- one of those marvelous miniatures that looks like it's been growing forever and say, "That's you!"

No, he's not a tree -- people who come to him for help or advice or work are not sheltered by him. They're sent out into the world like me, to find themselves -- in his two worlds -- books and baseball. (Baseball gets top billing.)

Baseball, I don't know, but books ... I've benefited from his creative, quicksilver mind. I've watched from the sidelines -- seen him ascend high in the business world, crash, and manage to ascend again, even higher ... He's there, at the top of his field --books, and baseball, baseball and books -- even if he isn't there now, the importance of him and what he's accomplished is there.

Hey, I could sign up for his Website, be a follower. (My big eyed dancer lady face would be pretty funny looking amongst the pitchers, catchers, and coaches.)

Okay, what if I put a comment on his page at checkswing.net-- "You've been in my life as the starting point from which my sense of myself as a writer began. Been there for many years as someone who affected me, inspired me to expand where I was heading with my childlike "till death do me part" commitment to dance forever -- and write. Write more. Not fancy, just speak and talk and get the words out."

There's a very small piece of a Jade plant that's been sitting in the hall outside my office. JC bought it for me a year ago. It reminds me of the jade plant that grew outside our log cabin in Malibu, that spread, grew bigger the entire time we were there, kept expanding till it was more than ten feet tall and almost as wide as the house . Every time Ipruned with the hedge clippers, and cleared away the cuttings, any little piec 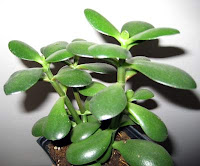 e that was left on the ground would take root, and grow again.

That's YOU, JA, growing, expanding, becoming more important -- you are an amazing Jade plant.
Posted by em's talkery at 5:34 AM