In April, I got information about a great Dell computer for JC. Fussed around, wasn't ready to buy, because I didn't have time to do the installations -- his twenty-two software programs could take me three days.

Hurray! I bought it in July. Got Mike, a top notch technician to do all the installing. It took Mike eight hours at $110 an hour. (I'm not complaining -- it's worth every penny. I was able to do my work, and JC went from being a slowpoke on an old computer to being a speed king.)

Feeling a tad jealous because JC's "Inspiron" is so fast, and my Dell is five years old -- what the hell -- I called and ordered another one.

My salesman said it was no longer available. The alternate machine sounded okay, though it had three compressor things that made me uneasy. Nevertheless, I gave him my credit card number.

Well ... I found myself fretting. Realizing the compressor stuff was haunting me, an hour later I called back and canceled the deal.

My salesman was at a meeting. His assistant said, "You can't cancel."

I said, "Of course I can." He explained why it was too late. We argued. Finally I said, "I'm calling my credit card company and stopping payment." I wasn't sweet -- wasn't bitchy, but I was definite, and strong. When the guy kept arguing, I hung up.

A short time later, my salesman called. The order was canceled.

The following Monday, I called Dell's "rebuilt" department, and said I wanted an "Inspiron 530." The friendly cheerful saleslady assured me that an Inspiron was available. I gave her the order ID that was used when I purchased JC's computer.

Ho ho... I'll bet my name is on the Dell list with A SKULL AND CROSS BONES 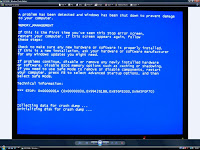 Wait a minute --whoa -- JC's Inspiron got a "blue screen" warning. It's taken three arduous phone calls to tech support, three techies, about ten hours for them to figured out it's a "driver." The updated driver is not "digitally signed," but it's working. (It costs a software company around $30,000 to get their drivers digitally signed, approved by Microsoft.)

Oh dear ... Logic and experience tell me we're in for a more blue screens.

I bought what the last tech guy sold me -- a terabyte backup device that holds 1000 gigs. It'll backup our three computers; bought a yearly "software" policy (unlimited incidents ). The two packages are a 400 dollar raincoat for Em the Computer fixer, just in case we're in for more bad weather.

Have you noticed? Boy, I have! Anytime you buy a new electronic gadget, or appliance -- brace yourself -- each doowicket's is going to need a lot of T.L.C before it's part of your family.
Posted by em's talkery at 5:09 AM

We have a Dell too - several years old. But I'm thinking that the next time we buy a computer it will have to be a different brand. Sounds as if they have slipped.