OFF BALANCE IN SPOLETO, ITALY

I was very nervous.

It was a raked stage.

It was major festival -- Twyla Tharpe and 50 kids from the street-- not dancers -- were the opening -- an improv. The sheer mass bodies onstage, with Twyla tap-dancing in the center, was fascinating. Then, as the second number of the evening, I was dancing "Knoxville Summer of 1915," Then, Mikhail Baryshnikov and Carla Fracci were performing a "Medea" duet, choreographed for them by John Butler.

Composer Samuel Barber, and Gian Carlo Menotti, composer and founder of the Festival of Two Worlds, were in the audience, along with notables from around the world, critics from the N.Y Times, the London Times, and many renowned choreographers.

If the names don't ring a bell, the dancers were all "stars," as were the composers. I did a blog about my "Knoxville" choreography (See 'Off Balance in London, 9/19), and explained how difficult it is to balance on a raked stage. The performance in Spoleto was a year before London, the premiere of the piece as a solo. The climax, on the last notes of music was a dangerous balance on a rocking chair. Picture a stage on a slant, a rocking chair that rocks -- with my feet on the arms of the chair, balancing on it, I'd found a way to magically rise, stand up slowly, raise my arms up high, as if reaching, embracing God in the sky.

Aside from the dangerous ending, I'd choreographed a back "attitude turn" for myself," (a double turn), a classical ballet step, adding a waving-circling arm pattern that made it unusual, not what you'd see a ballet dancer do. And there were other tricky steps.

The nitty-gritty of all this -- I'm not a ballet dancer, but I was doing steps that could be judged balletically. I don't have "ballet" feet, but my arms, my use of torso were impressive, and my projection, the concentration that I have as an dancer-actress, was uniquely powerful.

On the day of the performance, at noon, there was a half-hour set-aside for me to rehearse with the orchestra and singer.

I marked, just indicated the dance steps, and marked the climax on the rocking chair.

Why? Because the day before, at the orchestra read-through rehearsal, Samuel Barber and Gian Carlo Menotti stopped me after I spoke the opening words. They marched down the aisle and stood at the foot of the stage, looking up at me.

Barber said, "We don't think you should speak. Menotti joined in. "Miss Martha Graham tried it, my dear. It doesn't work." They both said a few more words about Miss Martha, about the music not needing a verbal introduction.

I was stunned. I was afraid I was going to burst into tears. I needed the words to create my "parents." No parents were present. As the lights came up on me sitting in the chair, I spoke Agee's poetic words: "We are talking now of summer evenings in Knoxville, Tennessee, the time when I lived there (I stood up ) so successfully disguised to myself as a child. (I gestured, and a spotlight came up on each name as I said, "My mother ....My father ... My uncle ... My aunt ..."

I don't know how I dared to say what I said -- "Mr. Barber, Mr. Menotti -- I have worked on this. This is my concept. When you were starting out and had a concept, you went ahead with the concept even when people said it wouldn't work. I want to perform my dance the way I conceived it. I know it will work."

I'm not sure I've quoted what I said accurately. But I convinced them. They backed off.

And so that afternoon, during the final rehearsal, I didn't dance -- I didn't want to test the work and get their opinions again.

Back in my hotel room I napped. Two-and-a-half hours before curtain time, as the outside was light was fading, I stood at the hotel room window and looked out, watching the birds.

I wanted to be with the birds , free, flying off into the sunset.

At the theater, I thought about the birds while the audience was cheering and bravoing Twyla Tharpe's improv. Then I went on the stage and danced. Rarely have I danced as well, deeply concentrated.

Here's the painting I made when I got back home to New York. 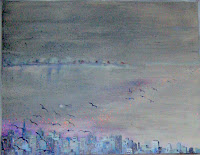 I'd have to drag in our ten-foot ladder to get to the high shelf where I have a carton of clippings, old brochures, and reviews. But I don't have to climb the ladder and dig for the clipping.
I remember and cherish what the New York Times critic said -- "...Emily Frankel dancing 'Knoxville, Sumer of 1915' reminds us what dancing is all about ... "
Posted by em's talkery at 5:02 AM

Good for you for standing up to them. I must admit that as I read the blog, I was afraid that something would happen with the rocking chair on a raked stage - so I held my breath until the end of the blog.

By the way - every time I click the button for the "Preview" I get an error message. I try again, and on the second time the preview works fine, and then the comment posts fine. But if other people are experiencing this error message, they may be discouraged from posting a comment.

Bravo! Reading this piece has given me the answer for the "Butternut" question. What do you do? As you did here and there...stay focused! I had a similar snow experience in '83. I departed from Freehold, NJ with light snow falling, but found myself in blizzard conditions forty-five minutes later, as I left the turnpike, continuing south towards Bridgeton on a county road. I carried turnpike images of cars in ditches. It really got scary! The wind-driven snow was blowing in so many different directions that an illusion was created which made it feel as if I was going sideways. A huge open field snowdrift had turned a major bend of the road into a car trap. There were several "butternut" samaritans helping free the captured. Visibility, zilch. Focus. My connections were dumbfounded when my Ford Capri turned the corner of Walnut(nuts again)Street fifteen minutes later. I know the intensity you felt. Existing in the moment. Not to be attempted by any of you kiddies at home. My toughest dance move was a pepper grinder! hahaha...mover, not a dancer. Did you like the film, "The Turning Point?"