I am married to a well-known actor, who has sometimes been called "the legendary John Cullum." Okay -- he's been around a long time and he is an extraordinarily good actor. as well as a Musical Theater Star.

Many people who saw him a long time ago, in "Camelot, "On a Clear Day," "Shenandoah," "On the Twentieth Century," (and very recently in "Scottsboro Boys"), mention him as their most favorite performer. 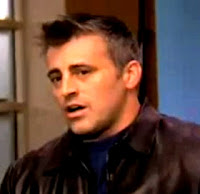 att LeBlanc as "Joey" in the television show "Friends" -- loved all the actors who were in that show. Each time I see a re-run of "Friends," I fall in love with the six performers all over again.

But Matt ... well, he was sexy, funny, charming, and unpredictably amazing. I watched him in the other shows he starred in after "Friends," but only for a while. Those shows didn't work. Sometimes it seemed as if the supporting actors and actresses just weren't interesting. When Matt was on the camera, (onstage), he was fun, but when he wasn't on, the shows got boring. .

Now Matt's in a new show on Sunday nights, called "Episodes." The ads summarize it saying -- "A married writing duo sells its U.K. sitcom to Hollywood and finds the price of success is Matt LeBlanc. The "Friends" star, foisted on the creators, plays himself as a demanding but savvy he-diva in Showtimes witty satire about lies, damned lies and TV."

I am not sure "Episodes" works. I got restless, even when Matt was on camera -- somehow he seemed restrained, but ... well, I'll watch again.

This film clip made me laugh and cry, thinking of the auditions that my legendary actor husband goes to when the directors and producer love him, but he isn't what they have in mind for the role of a granddaddy, a dying father, a great grandfather who's got Alzheimer's. In the past few years, very often those are roles my husband is asked to read for.

Here's Matt, and it's funny, funny sad, and true, watching him to audition to play himself.
Posted by em's talkery at 4:00 AM

I'm obsessed with the series; it's my new favorite of the year! I'm also a huge fan of Stephen Mangan, whose performance in the recent "Norman Conquests" revival ranks as one of the greatest things I've ever witnessed.

I've watched the first four episodes (and can't wait for the rest) and find that it strikes an interesting balance between the satiric and pathetic. I think, too, that this tongue in cheek portrayal of himself is the most nuanced performance LeBlanc has ever given.

Here's an interesting article I read from Salon about his performance and the series:

I leave so much to preselected series's on my DVR that I hadn't realized that this one had already started, although I have seen him promoting it on talk shows or did a week or so ago.

Thank you Em for being my TV Guide! LOL