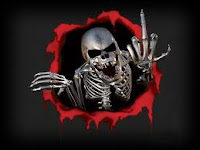 I haven't liked horror films ever since, as a very small child, I saw 'SHH, the OCTOPUS" (Click -- read what I wrote about this.)

I wondered how does Guillermo de Toro, the creator of 'Don't Be Afraid Of The Dark," a new hit, feels about his film?

Time Magazine's Gilbert Cruz, asks: "You grew up in Mexico, where a scary drug war is going on. Why not make a movie about that?"

Del Toro says: "I'm not a filmmaker who can speak directly about politics without addressing it through fable or parable. It's just not in my makeup, and the horror film is a very political genre. But I cannot go back to Mexico as a director because of the kidnapping of my father. A film is a highly visible venture, and I can't risk it."

(Cruz and Del Torro briefly discuss the fact that del Torro's father was kidnapped by bandits and held for ransom for 72 days in 1998. Though his father survived, it continues to haunt del Torro as a storyteller.)

Del Torro says: "Like fairy tales, there are two facets of horror. One is pro-institution, which is the most reprehensible type of fairy tale: '"Don't wander into the woods, and always obey your parents." The other type of fairy tale is completely anarchic and anti-establishment."

Cruz : "You have an interesting living situation, with a house, separate from your family, for just your books, your posters, your art and your work."

Del Toro explains that he dreamed of having a house with secret passages and a room "where it rained 24 hours a day ---that when you're over 40, you fulfill the desires you've been harboring since you were seven."

Cruz: "What did your wife have to say about that?"

Del Toro: "She was happy. When you're 7, your mother throws away your comic books. When you're 40, you should be able to prevent that."

Cruz: "How do you deal with people who think of the fantastic as infantile?"

Del Toro: "I try to avoid long conversations with them. You cannot convince a Buddhist to become a Protestant any more than you can convince a person who embraces realism as the highest form of art that fantasy is an equally important manifestation. It's impossible."

(Mmm .., I wonder how Steve Jobs. or Microsoft's creator, Bill Gates would react to this big blanket remark?)

Cruz: "You speak as if your art is your religion."

Del Toro:: "It is. To me, art and storytelling serve primal, spiritual functions in my daily life. Whether I'm telling a bedtime story to my kids or trying to mount a movie or write a short story or a novel, I take it very seriously."

(Why can't this del Toro just say yes? Why does he layer everything with extra intellectuality?)

Cruz; "Why do you always wear black?"

Del Toro : "I have been told it's very slimming. [Laughs.] But let me tell you, no matter how I look in black, you don't want to imagine me in white. 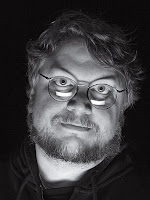 (Reality -- black hides the dirt. When you wear black every day, your clothes don't need a lot of washing. Maybe you do, but nobody sees it.)

I can accept horror films, as art, but it isn't art that I seek out or enjoy. I think that horror flicks encourage the taste for violence, the lust for shock, ugliness in people who haven't grown up, are stuck in adolescence.

I feel, from what Guellirmo del Torro says, that he knows he can make money making horror films, and his "artistic" creativity is snagged in making money.

I can't watch horror films either. But I do like good science fiction.

I can't watch this video-toooo scary for me! I guess it's because these kinds of movies are too real. I love the old classic scary movies like Wolfman, Dracula, the Day the Earth Stood Still, etc. Those are fun to watch and so entertaining. Can't watch the horror movies either-too gory and scary. I must be a wimp! Lol! kam Kathleen Ann McGee

I can not and will not watch horror films. Why watch something that is so negative? There is enough negativity in reality to suit me. I like to laugh or get into a deep, interesting story when I watch a movie.

I like scary movies and thrillers, chillers and creepy movies 'Don't Look Now' was brilliant and still holds up today. But I dont watch ridiculous gore fests. They do nothing for me. x

"I can accept horror films, as art, but it isn't art that I seek out or enjoy." EM quote
* * *
Bravo, EM ~ it's not the dark I fear, but all of the positive & negative things that linger therein because my own belief system tells me 'stuff exists'.
* * *
This movie has a particular paranormal horror theme vs. slasher, ripper, violate & murder ones that I specifically abhorr.
* * *
I've heard this movie is 'well done' as the horror genre goes....especially now I'm no longer in the mood to mentally 'pee my pants', let alone don 'Depends' just in case. Ima pass.
* * *
Ima pass ur, uh, except if when it comes to televison movie rental if my daughter & Grand should choose it. Picture this...3 on a couch, holding hands, legs intertwisted with each other, skeered outta our minds.
* * *
National Public Radio is on right now & guess what they are discussing the 'horror genre' post 1970. WOW! Timely blog post ~ HUGZZ Ms. Em!