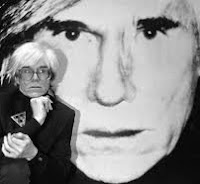 I never liked calling his work "Art," but critics and art lovers say Andy Warhol was a major American artist.

His paintings and exhibits evoked nothing in me but wonderment about why he was famous. But now, I read in Newsweek that the most important figure in contemporary art may be Andy Warhol. Not the Andy W. who died in 1987. That Andy, who gave us "100 Campbell’s Soup Cans" is called an "old master of pop art."

Today, in the art world, the other Warhol, the man who did wild things with his life like appearing on the "Love Boat" television show, making paintings by peeing on steel (as his canvas), creating totally static movies -- is inspiring, influencing, evoking imitators, and affecting culture today.

Curator, writer Jack Bankowsky -- who organized, in 2009, an exhibition called "Pop Life -- paired Warhol with Jeff Koons and Damien Hirst. (See my post "Hot New Art " that displays their art, including an $8 million dollar decaying dead shark in a tank at a museum.

Bankowsky said Warhol has created the “next step after art in which social climbing, shopping, cruising, and collecting are bound up in a roving social sculpture held together by art — which is to say business.”

Whoa. This critic is saying that Andy Warhol, connecting making money with his own 1982 "Dollar Sign" paintings, 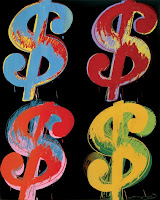 which depicted Warhol's feeling about selling out, was setting an example for all the artists who now do more than paint and sculpt — who appear in the tabloids and on TV, who design for Louis Vuitton, star in luxury ads. Their price tags matter as much as the weird, repulsive "art" they create.

In D.C., Warhol's creations are on display at the National Gallery, titled "Warhol headlines. The exhibit includes video, and film doings by Warhol, while at the nearby Smithsonian’s Hirshhorn Museum, they're displaying 102 of Warhol's 179 shadow paintings that are various unintelligible images.

Buyers are grabbing early "Marilyn." His films -- "A great body of work ... simply breathtaking," said John Hanhard, a veteran film critic --.along with all Warhol's early works, are selling out. Andy's 1986 self portrait sold for $38 million, in May.

“I always think that quantity is the best gauge on anything,” Warhol once said. And like a maxim, it governs his art. When rich collectors pay millions for a single shadow painting, as though it were a Rembrandt, they aren’t understanding what Warhol’s products mean. But they are proving his point, anyway.

And Bankowsky said, “We have to accept the business/art network as what he’s about.”

That the body, figure, face, the very being of Warhol -- everything he did and was is worth millions ... well ... he looked sort of like a gay rock star.

To me he was a creative cultural phenomena who knew everything there was about marketing himself.I suppose he was an "artist". Who is to say? Jackson Pollack dripped paint on his giant canvases and walked on them or whatever he did. That was art too.

Neither of them created art that I would want to own, if I could afford it.

Each was appropriate for his time. Neither one spoke to my personal sense of aesthetics.

I believe that what we, as artists, create is art in it's own right. However, does that make it good? To ourselves, yes. To others, maybe not. Regardless, his art speaks volumes about the times of his creative flair. If you look back on history, most artistic endeavors align with the current events and excitement of the day.

For me, Andy Warhol made art out of simple things! He gave me a perspective on an object as basic as a soup can and as exciting as a purple cow. He is also known for his flamboyant lifestyle and one wonders if he was the key towards more tolerance in the world. Born a Leo, he was made for success.

Kudos to Mr. Warhol for a successful career, albeit posthumous.

Mr. Warhol is an interesting topic Em. I am not that familar with all of his work, but I find it different and interesting. Not one of my favorites-I like your Picasso painting the other day better. I would never be able to afford any of his work but appreciate his art and history as you have told it in this blog. Thanks for widening my art horizons! kam

Dunno about others but for me "creative" is synonym of "crazy".

When I think about "crazy" I recall that psychotic deviations are well classified, studied, in other words, predictable.

On contrary, sanity has no clear definition, classification or understanding.

When I think further I seem to be interested in and more comfortable with creative people because they are more predictable to me.