When I read articles. and there have been quite a few lately, about women becoming more powerful, earning more, being treated as well or better than men, I nod, but also I sort of cringe.

I'm a woman and I want women to do better don't I? 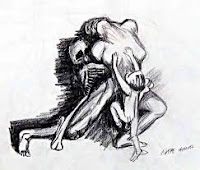 Well ... mm ... Hillary Clinton whom I admire and pay attention to, recently said, “I believe that the rights of women and girls is the unfinished business of the 21st century." Mmm. But celebrating our progress right now feels wrong.

It's great that people are more educated these days, and paying attention to women's progress, but I think other things are more important.

The end of DADT -- I'm celebrating that! You can enlist and be who you are. And focus on poverty, starvation, people trapped in cultures that are at least 50 years behind the times, with no doctors, no medicine, running out of water, people dying and thrown away like garbage -- focus on wars, civil wars, tribal wars and us, the big benefactor -- we're sending billions to the countries to help what?

Yes, many of the thoughts I have today are colored by the dilemma of our country today where Democracy is not working. It's been taken over by Americans who have found a way to run the country -- to RULE the country their way.

Suddenly we have a ruling upper class and a lower class.

I'm glad women are progressing even though I'm not celebrating it. I'm glad more soldiers will be coming home from Afghanistan. I'm glad -- very glad -- that the Wall Street Protests are alive and kicking and happening throughout the country. I'm glad that my husband is working and we own a building and won't be poor, even if the country dips into a deeper depression.

I can't celebrate because I am fearful about what's ahead for America between now and November 2012, and I see that many Americans, feeling as I do, are no longer really sure they want Obama to be reelected.

I think Barack Obama is our hope -- his second term, a Democratic majority in Congress is what I'm focusing on, and yes, oh yes -- that's something I'll celebrate.
Posted by em's talkery at 4:00 AM

Many of your views coincide with my own. DADT is extremely important to be celebrated because regardless of sexual identity, we are all Americans. So if someone who isn't heterosexual wants to serve in the armed force to protect and defend this country, then by all means, do so.

In the case of Obama, I think he has done what was possible with what he faces. I knew he'd win the election and any black man, and any woman would have won after the Bush administration as long as they were half smart, because at the time, few Americans trusted the Republican party. And people have to remember that "black people" didn't get Obama elected, Americans did. Because African-American/Black only make up 12.6% of the population. And black people have to remember that Obama's not just their president alone. The problem with this country is that we have parties at all. Like you said we have a ruling class jockeying for position and control and look to hang things up in debate so the people can't benefit. Let's get back to real Democracy and not this smoke screen of politics and maybe. Regardless of hope, race, ideology; the president is just one man and can never accomplish anything alone.

So I agree. I celebrate the advances of women, but I'd rather celebrate an America who not only cherishes and advances its women, but all things to benefit those who live "legally" within its borders. Our focus needs to return home to building infrastructure, defense, protecting our own borders, building more national pride and unity. Before long someone will be bold enough to try to cross the Atlantic and find out who's cock is bigger. I think I'll be dead by then, but I'd like to sleep in my grave knowing that those I leave behind are safe in this Great America.

Yes, America is in dire straits. The people are tired of the mess and it doesn't seem to be getting better. On the lighter side, women have made great steps and progress and continue to play an important role in things. I think the presidental candidates are scary and a joke. Hopefully, because of this Obama will get re-elected....there is hope. kam

I would love to comment on this one but I will hold my tongue. I believe that we are humans. All humans that like different things, vary greatly in looks, even love others despite those differences. However, we are all human....lest we never forget.