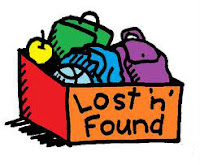 LOL - didn't you realize there's another dimension? Things pop in and out of it all the time, things like your towel, paperclips, books, pencils, keys - U name it. Must be cluttered over there (wherever there is) until the item pops back.

You'll find your green towel when you least expect it. I am always losing things in my house.

You will find that green towel eventually whenyou least expect it. When I was 17-19 yrs old I video taped my close group of girlfriends and I doing film skits and put it all to music. that was about 40 years ago and last yr one of my friends said, "Where is that video?" So I spent 6 months hunting for it and finally found it-the last item to come out of a shed when cleaning and sent it off and made a DVD of all us crazy girls acting silly and made copies for all to see. It was such a happy and fun moment to find and see this video! We all keep laughing at it....it took 6 months to find and search, but what a treasure I finally found. Good blog today Em! kam

LOL, Em, I can relate to your post. I am fortunate in that regard, mostly, as I don't have a lot. My struggle these days is going into a room for something, and not remembering what I was there for.

Yep. Woke up one morning and my wife was gone. Now I keep searching forever for her -- so that I know exactly where I can hide, so that she never finds me again; just in case she decides to come back. Ha ha!

Socks. They say the dryer eats them. I have a hamper full of unmatched socks.
Maybe there IS some graveyard for lost things in another dimension.
May they stay where they are with all the other lost toys, keys, socks and things that go bump in the night!
Louise Sorensen
louise3anne twitter

A green towel, eh! It'll be in the nearest Irish Bar, with someone swearing it's the queerest Irish flag s/he ever did see -- what with that iodine spot an' all. :)!

I have a few things that have been with me for years. I understand that they carry more than just the intended usage with it. It has many stories. Even if you never find the green towel again, it is something that binds you to the times spent with it. It will never be LOST.