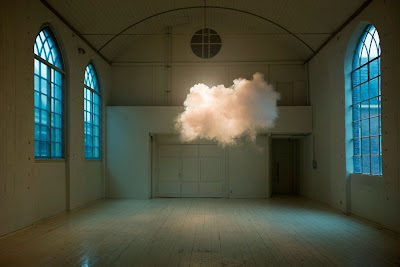 Time Magazine arrived with this photo, of a cloud inside a room in a house. An inventor has found a way to create it.  It's a complicated process that utilizes a fog machine and various ways to control atmospheric pressure. The cloud doesn't last long, but it's truly amazing.  The photo heralded the magazine's list: 25 Most Significant Inventions of 2012.

Donning my spectacles, I browsed the list.  I marveled at this blue ball which they've named Bounce. Wow! Police, firemen, soldiers on a reconnaissance mission -- people who are endangering their lives toss Bounce  into an area they want to enter. The ball is embedded with tiny cameras that catch and film everything. These heroic people can learn, from the computerized receivers they carry with them, what to expect and how to avoid being killed.  A Bounce costs $500.


Wow, Enable Talk Gloves, $75.  Wearing them enables  speech and hearing-impaired people to communicate with those who don't use or understand sign language. The gloves are equipped with sensors that recognize sign language and translate it into text on a smart phone, which then converts the text to spoken words.


An inventor has created Wingsuit for gliding longer distances -- you can descend from a 5000 foot cliff to the grocery store in town. (Price: $600 to $2,000, depending on extra capabilities you want to have.) I'm hoping for the day when I can don a contraption when I visit JD, my son, a working actor in Hollywood -- see JD in a show and NOT have to drive on a California freeway.

Thinking of speeding along in L.A., I'm impressed by the new Tesla 2,  this $49,000 electric sedan that looks like a Jaguar and goes 265 miles on a charge. Also on the best inventions list is a $200 tire, that repairs, re-inflates and fixes itself as you're driving.

Fixing?
The Motion Activated Screwdriver is $40.00.
It's interesting, but for me ... well, I have an electric screwdriver I used to install a door-closing device. It was tricky -- the screws kept falling into my face, and I couldn't figure out exactly where it needed to go. Finally my husband uninstalled it and reinstall it, using his ordinary screwdriver.  Maybe he'll like the new one.


This Maker Bot-Replicator was heralded as a major new desk top tool at $2,199. It "prints" -- the design, and the model of it, extruding a plastic material -- for example, the architectural model of a house you designed. Hmm -- sounds las if it's something you've got to have if you're an inventor, which I am not.


Google Glasses can be purchased for $1,500. It's a computer you wear like spectacles, that can record EVERYTHING you see and hear. Um ... why?

Hey, for $555, per suit, our Armed Forces can now provide body-armor for women who have been wearing improperly fitted, often, over-sized male armor. It doesn't look great or sound like a great invention, but it's good news for female soldiers.

Browsing on, learning about new contraptions for household chores, war weapons, taking photos -- all those things we're dying to improve -- I read about NASA's Z-1, a new space suit with important, innovative capabilities.   What sticks in my mind is the fact that it's silver, and looks as if it's a silver prison; I'm not surprised that the price says  "classified."'

For studying what's on the planet Mars, there's the Curiosity  Land Rover -- it costs $2.5 billion.  (That's not a typo; it's b for billion.)

Hmm.  Being a blogger, who grabs what's in the air, I'm sort of compelled to share these new things with you. Maybe I'm stuck in a room with a cloud, or just not in the mood with Xmas shopping looming. The fact is, I'm not excited, or thrilled by any of this stuff, other than Bounce.

In your own cloudless room, amble through the list  -- check it out for yourself: Time Magazine Best Inventions of 2012.
Posted by em's talkery at 4:00 AM

The world is moving much too fast for me --- or, maybe, too slow!

The picture of the cloud in the room looks like a painting by Rene Magritte, the surrealist artist.

Wow! What an interesting blog/ Lots of new inventions and if I had alot of money to spend I might get excited. These are fun to look at and read about though. Thanks for sharing. kam

I love the picture of the cloud in the room.
Technology is moving so fast that even today's children, who are learning computers and tech gadgets, will be lost in the dust of even newer tech invented as they grow old.
Last night on tv, we were watching a program, about quantum physics.
It was razzed up and dumbed down enormously, but the end result physicists think possible is the instantaneous transmission of energy from one end of the country to the other, quantum computers that make the current ones look like etch a sketch and even communication from one planet to another. And that's just off the top of their heads. They said you can't predict what new technology will be developed until you get into it.
On the news last night, we saw a woman, paralyzed from the neck down, who was feeding herself a chocolate bar with a robot arm that she controlled completely by thinking about it.
Someday I'm sure someone will fit up a person holding frame that supports a person completely and is controlled by thought (I think it's based on bio feedback) alone.
Paralyzed persons will be able to get around much better than they can now. That's if that tech isn't made unnecessary by advances in biology, that will allow regrowth of nerves and spinal connections.
In 1812, 200 years ago, we were having a war. Using single shot muskets, bayonets, cannons and (possibly, I'm not sure) sailing ships.
There was no antibiotics, the infant mortality was about 66%, and infection from an injury often required amputation.
Imagine what life might be like 200 years from now, if the world doesn't burn up or freeze with global warming? (it's impossible to predict what will happen with the weather due to excess greenhouse gases... It could result in another ice age, as easily as runaway heating)
So life, if there is any left on Earth in 200 years, should be very interesting.
And speaking of which, it's another reason to get some people off of earth and colonize another planet. All of which scientists are slowly working at.
Good topic, Em.
Louise Sorensen
louise3anne twitter

Interesting, fun and perhaps one day useful - once the Tesla comes down considerably in cost.