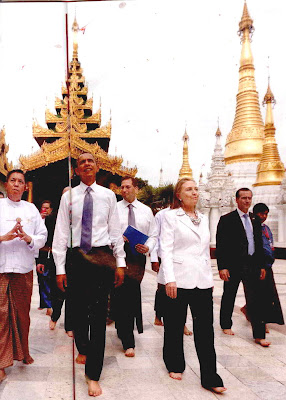 Here I am, sorting various personal things on my mind, focused on me, and lo and behold, I see a photo of Barack and Hillary, in Rangoon. November 19, 2012, visiting a sacred temple, in their bare feet.

Yes, they were doing their jobs. They are paid for doing their jobs. We put them there in Rangoon. I can't see it but I feel an aura all around these two very successful people, who have fulfilled their own dreams by achieving the highest offices in my country.

He, right now, today, is handling hours and hours of negotiating, struggling, researching, phone calls, conferences, and the pain it must give him, that a first black president in our wonderful country, is still contending (I think he is), with deep, deep prejudice.

She, right now. today, is recovering, as well as unwinding, letting go of the stress of having sat, slept, lived in airplanes, hotel rooms, met thousands of strangers, broken bread with them, been deeply, deeply alone for more than four years, using all her talents as a person, and as a woman, while serving, (I think she has been), serving the country.

And they were in their bare feet. Barefoot, not naked, but clothed in the uniforms they have to wear in order to do their jobs -- barefoot so their feet can progress on paths that took them to work in unfamiliar places. Yes, they allowed themselves to be naked -- unprotected by society's niceties, as they did whatever they could DO that is best for our country.

Yowie -- what's best meant swimming sometimes in ice water, keeping afloat, treading on hot coals -- being over-heated by the sun, drenched by the rains, as they carried the heaviest of heavy loads.

And now? Does she think selfishly, every once in a while, what's best for me? Does he? Of course, Aside from work, they're just plain regular humans.

Could you or I do what they were doing when this photo was taken? What they are still doing -- right now today -- even though the circumstances have changed?

I don't know, I only know that they are barefooted leaders and I, in my shoes, and socks. and safe outfits, in my safe small world, inch along the paths that they made for us.
Posted by em's talkery at 4:00 AM

Unfortunately, Hillary Clinton has been doing very little at all to 'serve her country'. She is the public face of what has become known as the Bush-Clinton Crime Syndicate.

I do not expect you to believe this by my statement, but I do hope you have the courage to believe the people, including one who has been a political prisoner of these criminals, inside America, as far back as the early 1990's.

You will find more truth about your country than you would ever want to know, in this three hour audio, which took great courage by it's participants, to state.

I would encourage all true Americans; those that believe in freedom, obtained by the rule of law, to listen to the whole three hour audio, and accept it's contents. One of the three participants, is the lead editor of Veterans Today, an ex-US Ambassador to the UN, and unquestionably, one of the few Americans left in public view, willing and able to speak from the inside, about these matters.

Here is the link to that audio:
http://www.occupythebanks.com/2013/01/censored-stew-webb-gordon-duff-bush.html

I commend it wholeheartedly to you, and all your wonderful, no doubt, readers, who care about human life, and human dignity, freedom, and the rule of law.

The truth/reality may be both horrifying, and frightening, to first come across, but it remains the truth nevertheless.

Brilliant piece, sensitive and insightful. And I have to say that the RE-election of Obama seems even more significant than his election. The first might have been down partly to chance, reaction to a particularly awful predecessor, revulsion at a frighteningly vice-presidential candidate opposite, just a desire for change for its own sake; re-election means that enough people realised that he really is someone who can represent the most powerful nation on Earth and fill its most powerful office.

As for Clinton, what a fine successor she would make. If only she can recover her health. And, as you suggest, her equanimity and some inner calm.

A salute to Hillary - respect from the bottom of my heart.
Giok Ping Ang

I'm worried about Hillary. I hope she pays attention to her health and need for rest.

Em, I love the image in the photograph and I love the one that you painted with your own words. It read like poetry.

No, it takes a very special person to do what they do and I surely could never in any way emulate them

Great tribute blog to Obama and Hillary. Yes, I agree with Linda. Your words speak almost poetic in essence and gives one a moment to
reflect on how far these 2 leaders have brought us. Thanks for sharing. kam

Hello Em, your manage to transfer your thoughts and feelings so well to paper/computer. Obama though is the second black president of America. The first was John Hanson 1781-82. Obama is the first black president under the present American Constitution, just as George Washington was the first president of the US under the present constitution. There were 7 presidents before him and before your present constitution. In fact, George Washington was one of the members of congress who voted John Hanson in (unanimously)as your first ever president.

Em, I love the Clintons with much respect and I pray Hilary gets better soon. Her health is very important and my belief she has tried to help our country.
Your picture was awesome and very touching walking barefoot.
Em, You have a super way with words and those words touched my heart, I read them with love and compassion and kindness. Thanks for sharing!

"I, in my shoes, and socks. and safe outfits, in my safe small world, inch along the paths that they made for us." I love this. :)

So well written Em. I enjoy your commentary SO much. Thanks for sharing your insights, opinions and feelings with all of us!
Lisa