Unforgettable face, the beret, the love in her eyes...

A president almost impeached for his relationship with her.

Others got fame and glory from the scandal: Linda Tripp, a best friend this girl never should have trusted, became a name. Kenneth Starr, who was investigating other Clinton wrong-doings, became an even bigger name. Other names floated around -- a UN Ambassador the President asked find a job for the girl -- a literary agent who advised Tripp to record her conversations with the girl -- anyone, everyone who was even trivially involved, became a name.

Other womanizing Presidents -- Jefferson, Harding, FDR, Eisenhower, Johnson, JFK -- they are still heroes. Clinton's blatant lies about this girl are on a tape that makes you cringe, but Bill is certainly a hero today. And his wife Hillary, who stood tall throughout the scandal, is most definitely a heroine -- a woman beloved by other women, admired for the way she handled infidelity, as well as her political campaigns for the Senate and the presidency, and her work as Secretary of State.

And the girl? She was a spokeswoman for Jennie Craig for a few months, but let go -- perhaps, because there were complaints that she represented wrong-doing, or maybe because she was gaining weight. She went into the pocketbook business, but her expensive purses did not sell well. Her dates with other nice-looking, ordinary men were in the gossip columns with photos. Talk of the tell-all book she was going to write was mentioned in the news. Other jobs -- jobs for which she was eminently qualified -- her notoriety got in the way and employers turned her down. 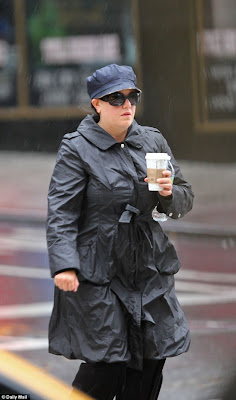 Now, today she can walk down the streets of NYC unnoticed. (Is that why she's wearing sunglasses on a gloomy dark day?) Apparently paparazzi and autograph hounds don't pay attention to her these days.

Googling, I learned that she gave up her expensive one bedroom condo, and moved back in with her mother who has a penthouse in NYC. She's still unemployed, and still looking for a job. There have been no husband, no babies, or that home in Westchester that she, quite often, said she wanted.

Recently, the girl (she's 39 now), told a friend, who told some friend who knew someone on OnlineMail.com, U.K (my source for this post,) that she's working on her book -- that tell-all book that's been mentioned before. OnlineMail reports that there's a $12 million deal on the table.

If it's published would you buy it?

How you answer that question tells us what the reward is -- for Monica Lewinsky's 15 minutes of fame.
Posted by em's talkery at 4:00 AM

Great mini piece on the forgotten one, who was propelled to a "comercial break" long fame by accident of lust, but with it propelled others to life long fame. Great account, spiced with beautiful artistry!

Good blog today Em. Yes, I would buy and read the book just to know what went on between Clinton and her. I watched the hearings when it was hot news and wondered what would happen. Bill Clinton sure shines still today and Hillary. Interesting info to find out what this girl has been doing. Thanks for sharing. kam

Thanks for the post, Em. I won't be buying the book, LOL.

It is really a tragedy, because she was too young to know what she was up to when she got into all this, and now she is paying the price.

I feel sad for her. She looks sad in that photograph. Would I buy her book? No I wouldn't. It's old news and I read a very well written book about it years ago, by a well known writer, whose name I can't remember.

She is fortunate to have well off parents who can give her a home, although at her age, I can't imagine that living with one's mother is all that great.

I hope someone will hire her. I hope people will buy her book. As, I said, I will not be one of them.

Em, No, I wouldn't buy it, but all the while, as I read, I thought, my God, her life has been ruined and shame is all over her. She was star struck and perhaps a manipulator, but really, she fell prey to the charisma of a man the whole world admired...... and she slipped into dangerous territory. Its a tough one. I could judge her. I do judge her. I judge him too. He was an adult. He was the President. He knew better. He took advantage of his position and of her. And frankly, he lost me in this..... as did Hillary, sadly. Her standing beside her man has always felt like a political move. If she had confronted the lie ...if she had let him go.... and man not worthy of her, really. Not at all. A man who would lie in front of the whole country, a country that elected him, loved him and trusted....... if she had taken him on and indicted him for his foolhardy behavior, she would have won my vote for President.

I wish her the best, however she is not the first one who would try to claim fame through a president. I hope she finds a job, sounds like my life, my daughter is living with me except she is much younger. No piece of cake. As far as her book, Not buying it here, I heard to much about it when it all took place. 15 mins of claim to fame is over. I sure hope she can find a job, that is sad. However she has wealthy parents that is something most of us are not blessed with. Good post, good luck for her. It always bothers me to see anyone out of a job.

Heгe is my weblog ... http://toyalert.com

No Em. I wouldn't buy the book, although I hope she writes the book, and I hope it's a best seller. As much as I adore you, I must disagree about the philandering X president being a hero. In my opinion, any president of the USA, who has an affair with an intern in the Oval office, then lies about it under oath, who humiliates his wife and daughter, who destroys the life of his young consenting sex partner, who deceives the nation and the world should not be called a hero, even by the most liberal definition of the word. I simply do not agree that he should be hailed as a hero, while she is shunned and scorned, sentenced to wearing the scarlet letter for the rest of her life.

There is room in most people's life times for numerous triumphs and tragedies. Moments in the ocean of one's life may seemingly define those blessed or scared by fame; but I'll guess that there is a lot of blandness overall associated with most human; as we know the nature of those beasts. I only see one of the herds from my time that's vaguely recognizable; no one I'd like to meet. Pardon me for channeling my namesake, “Marcus Aurelius”, who passed away on the seventeenth of March in the year 180 CE.

When happened in the Oval Office between those two is only the business of three people. Bill, Hillary, and Monica. His sex life is of no consequence and he should not have had to confront the issue in the public arena. All three of them made choices and we should not blame, point fingers, or even be privy to it.

We should have never heard about it and what the Clintons decide to do with their marriage is their business.

Truth be told though, I would buy it just for salaciousness of it. I would not treat the book as a work of non fiction. I would expect things to be embellished, exaggerated, and even peppered with half truths. I just would like to hear her side of the story.