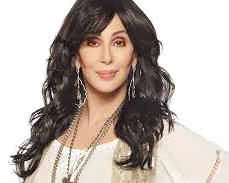 You know the name  -- you have seen her, heard her singing or talking -- how many times?

She's been in our lives since -- wow, the sixties!

She is a singer, actress, songwriter, music and film producer, film director, comedian, television host, model, fashion designer, dancer, and entrepreneur, who's done how many projects, albums, tours, fund raisers, interviews? Won how many awards, earned how much money?

I am taking off my researchers hat. With so many appearances on television, in movies, newspapers, magazines, the list of her doings is umpteen pages on the Internet.

I'm just plain remembering why, and how, she got to be the one and only CHER.

Is it her clothes? Her fantastic face? Or the way she answers questions about the men in her life -- her extravagant, spur of the moment doings?  Yes-yes, it's all that, and more.

I remember the house she built on Pacific Coast Highway. I passed it every day when I was driving to Malibu Gym to meet with my trainer. Cher's house was on a large plot of land, a couple of acres in an area where only the super rich can afford to build, and everyday her house got bigger and fancier. Trucks were parked everywhere, loaded with boxes, kitchen appliances, furniture, chandeliers, and palm trees -- workers were unloading them, sticking them into the earth like tooth picks.

Hey, just three people and a bird lived in her palace. In May of this year, there were headlines -- Cher sold it to singing star, Beyonce, for $45 million.  (There were also headlines about her selling her condo. Did she sell it? Wondering about Cher gets me tripping on fantasies -- where, and who is Cher living with now?)

Sonny and Cher -- heckling each other -- true love it was, their teasing, arguing. And their daughter Chastity, who came out, became a he, is now chubby, honest, Chaz Bono. Was Chaz there when Cher astounded us with her honesty, her grace, her loving tribute to the dead Sonny, after he crashed into a tree on the ski slopes? Or was it just Sonny's new wife with whom Cher wept, and tenderly hugged?

And while this was happening -- there were tours, major performances all over the world -- more awards, albums, successes and  triumphs, more incredible clothes, more revelations about her past loves, her present lovers, and that magically young, smoother, improved look of her.

Cher the icon is also the believable, natural, normal real person she conveyed in films -- in "Silkwood," "The Mask" "Suspect,"(I'll never forget the truth-seeking lawyer she played), and "Moonstruck." Cher taught us about honesty, about feeling and being who and what you truly are.

Always, always, this amazing woman is flat out there, telling us, "I don't give a damn about rules. I am just being me."

Cher said she was brought up badly by a mother whose mind was on herself. Because, as a young girl, Cher didn't have any special talents, Cher said she decided,  "I'm just going to devote myself to being famous."

And that she is doing -- with laughter, humor, affability, showing us the beauty, the wonderment of it -- sharing with all of us the fun and joy of being very famous.

I also love Cher. She is an amazing role model, and we certainly need more strong women out there, showing us it CAN be done! I admire the grace she has shown, living under the microscope of publicity for the past nearly-fifty years.

She's been the center of controversy MANY times, yet she still faces the world head-on, on her own terms. I'm also greatly touched by what a supportive and accepting mother she has been to Chaz, although I know it took her awhile to reach that acceptance--that is yet another lesson the world can learn from Cher!

YOU, Emily, are also a FANTASTIC role model, and I consider myself truly blessed to know you! Thank you once again for sharing your thoughts with us. <3

What a marvelous tribute to amn amazig show business icon. I totally agree with you Em!

I have always liked Cher

I can tell you do love and admire her by how you've written your above blog entry, as do I. Cher has always been one of my favorite people too. Sonny and Cher's single, "I Got You, Babe," was on the top of the charts when my mother died in 1965. I remember listening to that tune on my transistor radio with the ear piece plugged in, while taking the bus to visit my mom in the hospital before she passed away; that and Dylan's "Like a Rolling Stone." I hold both tunes dear in my heart, as well as both performers. They helped me maintain my sanity during some of my darkest hours. Thanks, Em.

Me too! Love her! I would love to sit, have lunch and chat with her. However I am afraid I would be so starstruck I would never speak. Epitome of cool, she is.....