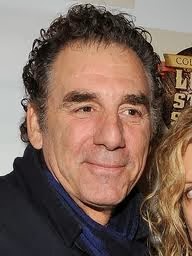 Michael Richards, the unforgettably funny character on Seinfeld is back to work again.

I missed him. I often watch the re-broadcasts of Seinfeld, and enjoy seeing episodes I've seen before. The shortcomings and quirks of Jerry, Elaine, George, and Kramer are a fun to see again and again.

Fifteen years after Seinfeld and seven years after his onstage meltdown, a racist tirade during a standup comedy appearance that made headlines, Kramer, (Michael Richards), is playing the sidekick (Frank Baxter) to an entertainer played by Kirstie Alley, in her new weekly series, "Kirstie."

Time Magazine's Belinda Luscombe, interviewing him asked, "On your new show, "Kirstie,"  you play the sidekick to an entertainer played by Kirstie Alley. How is that different from your role on Seinfeld?"

Michael explained, "'Kramer' didn't have a full-time job. So he was dangerous, because he was always making everything his job. 'Frank Baxter' has been driving Kirstie's character, 'Madison Banks,' for probably 20 years. He's based a bit on a person Kirstie knew, who was her driver and like a brother to her."

Luscombe asked if he preferred his new role, to what he played on Seinfeld.

Michael said, "I played Kramer like a dog: very devoted to Jerry. Frank's more of a rooster in a henhouse. He says, 'I'll take care of this,' and when he does, the situation blows up in his face. It's the old Laurel and Hardy 'Let me do it!'-- then Oliver [Hardy] ends up stepping on a board with a nail and you see him trip and fall down a flight of stairs."

(Oh boy, those skids, slips, falls, roll overs that Kramer -- fun to know that they were inspired by Oliver Hardy).

Luscombe: "So at 64, do you still feel the urge to do physical comedy?"

Michael: "That's my deal. I can't resist. If I have an opportunity to bang into a door, I'll do it."

She reminded him, "You haven't done much work since your outburst at a club in 2006. Are those two things connected?"

He said, "I wasn't getting much work before the incident, which was one of the reasons I was ding-donging around in those clubs late at night, unannounced -- coming in and working on material. I thought I would try to reinvent myself."

Luscombe asked a question that I would have asked: "Comedians have to be very loose and unguarded. Are you afraid of it happening again?"

He answered -- "What happened in the club? Oh, that'll never happen again. I know how to behave, to consciously behave. When something like that comes up, I don't let the heat of anger burn me up as it did. When you're under the helm of anger, watch out, 'cause it'll take you down. It's like being possessed by a demon."

"What were you angry at?"

"Oh, angry at the act, angry that it wasn't funny, angry that I was being interrupted, angry that I'm not as good as I would like to be. You know, I was frustrated that night, and so I turned on everybody."

Luscombe:  "When you later apologized, you said you were going to do some personal work. What did that involve?"

Michael: "I wanted to see more about the man I am, and that meant being apart again from show business. I took a deep look at this and thought, 'Yes, we all make mistakes, but let's go further and see more about me.' I moved away from Los Angeles. I took up photography, a lot of reading, a lot of writing. I traveled a bit. I got more in tune with my family. I began to take care of my mother, and still do, and that was helpful."

Luscombe: "Do you feel you've been forgiven?"

Michael: "I don't know. I know I've forgiven myself. That's where it really starts for me."

Luscombe: "What lured you back into TV? I'm assuming you still have crazy Seinfeld money."

(Fascinated by this interview, I kept finding myself asking the same questions that Luscombe was asking.)

Michael:  "Well, I'm an artist. You do it because you love to do it. It's what you are. It's the color of your fur. It's the same after all these years."

"You've said you wish you'd enjoyed yourself more when you were making Seinfeld. What did you mean?"

"I think that's one of the reasons I took on 'Kirstie,' because I wanted to do this more joyfully. When I was doing Seinfeld, I was very intense. Physical comedy takes more time to set up -- rehearsing how to come through the door, that slide I did. So I was always in development, and that made me feel like I wasn't able to sit back and enjoy the ride. So this time, I want to be more like a child out on the street just playing and having fun and not taking it all so seriously."

(Here's a video of Michael talking about all this with Jerry Seinfeld.


I am writing about  Michael Richards because I think he has a special something, as an actor that's rare -- more  than talent. When you see it, you find yourself going along with  everything the actor (or actress) does. You are in the scene, feeling with him, reacting with him. You, though you are the audience, don't translate what's happening into words or thought, or any kind of  wondering about what the actor is  doing. You are there. That's Michael's gift --  un-breaking presence -- utter thereness.

Interesting. Thank you for bringing this to our attention.

Does I believe in "second chances". Oh, heck yes- I have needed a few :) Do I believe that you can "forgive but not forget"? For the majority of us, no and I can't honestly say I have that depth of character. Can an actor really reinvent himself? Without a doubt, as an actor, an actor can reinvent himself if he is a true "actor" AND if he wasn't highly keenly adept at the preceding role. Again Em, you have me thinking in circles. I wish Richards well as my optimism leans in his favor. Thanks Em for the "round table discussion" that just took place in my head. As usual with your blog.

It's not like he signed a treaty with the United States Federal Government or anything like that that is going to be violated at some point. He must struggle with his fame burden until his last breath and endure the sting of any poisoned tipped arrowheads of kin-tribesmen, buckshot from the bleachers; or even, his reflection in any-ol' looking glass. It's not a second chance. It doesn't count in a world where the past, present and future are all neatly mapped out within the wide open path to the end. He should only worry about passing himself and looking back at his mistakes. Lot’s wife made that mistake and look where it got her. sez Dustspeck