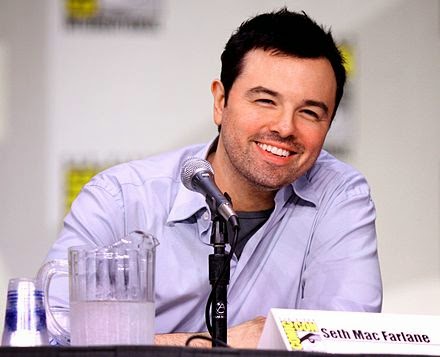 "Going where no man has gone before" I STILL remember that phrase that refers to the mission of the original starship Enterprise. But too, it holds true, as you have described, the likes of Seth MacFarlane (and I will throw in Neil Patrick Harris). These "kids" have been blessed with built-in "dare me" senses of humor that take us where "no man has gone before". Seth MacFarlane as host or emcee of ANYTHING always guarantees belly laughs and wonderment of HOW he "got that one" by "Standards and Practices". AND, I must add, the visual of you, Em, changing the channel - out of jealousy- makes me smile. It's good for us "common folk" to know that even the VERY talented whose star STILL shine brightly share prevalent universal reactions to, in the moment ,"one-up-manships".

Hello Em, Considerations can change at will. You can be anything, have any view or not :-) #EverythinWill_B_OK!
#AwesomeTeam♥#Odycy☮:-)

Interesting. I like Family Guy but it gets to be a little much after awhile. I consider these wunderkind the DaVincis and Michelangelos of their time. I would as soon be as envious of Einstein. We all have our own unique gifts. Thank of all the artists and scientists in the past who were scorned, tortured, and ignored in their time. Our times are gentler perhaps. I won't be impressed if my work is lauded after my death, But I wouldn't be surprised either! JK : ) In any event, the paths we took have all led us to the place we are now. If dancing Smoke Gets in Your Eyes, somehow led to your death, you will never know, because you didn't take that path. The bright lights and applause can also hold dark traps.
Louise Sorensen
louisesor.wordpress.com

I have such mixed feelings about him. He's brilliant, but his humor also veers into the gross, vulgar and needlessly cruel. After I saw his movie "Ted," I said: "I feel ashamed to be human." I don't get why someone so smart has to wallow in the depths. That said, any man who uses Onna White's "Shipoopi" choreography for an end-zone dance is always going to have a big piece of my heart!