I am an advertisement-avoider, but if the face in an ad is Sarah Jessica Parker's,  I pay attention. 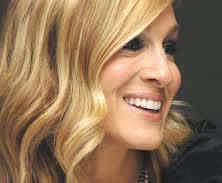 She's forty-nine years old now. The first time I saw her was twenty-three years ago, in Steve Martin's film, "LA Story," in which street signs were advising weather-man Steve about his love life. Sarah Jessica played SanDee, a rambunctious, uninhibited teenager who had a crush on him, was dying to sleep with the famous weatherman, though he was in love with another woman.

SanDee danced every line she spoke (or so it seemed) -- wriggling, gesturing, miming -- did it so effortlessly, making made every moment fun, fresh, inventive, seemingly spur of the moment.

Since then there have been many roles, dramatic, quirky comedic, even romantic leads for Sarah Jessica Parker, and she is not a typical Hollywood beauty -- yes, she has great body and expressive face, but it's not a cute face with neat-symmetrical features -- her nose -- (I'll just say it) -- often she looks like a Jewish college girl.

Her looks may have held her back a little. Even so, Sarah Jessica has had a amazing career in films, television, and theater, receiving many awards, nominations, tributes -- much of the "gold" that a famous actress gets. (If you're in the mood for a summary, click the links and visit biography. com  or skim Wikipedia, Sarah Jessica Parker.)

I have to say that "Sex in the City" is the only television series I ever watched religiously. Sarah Jessica Parker, as Carrie, made it work. The other actresses, Kim Catrall, as Samantha, Kristi Davis as Charlotte, and Cynthia Nixon as Miranda, made it work as they interacted amazingly well, with Sarah Jessica. In the course of the years that I have seen this series, (even now as I briefly revisit an episode that's being rebroadcast) these actresses have become even more interesting, and remarkably real.

It's the writing, the concept, the story, the camera work, the clothes, and I think it's the special talent of this woman, I think her "acting" is the real person who is married to the wonderful actor, Matthew Broderick, the woman who has created three children with him and maintained marriage and family, while zestfully continuing to work, grow, and expand her craft.

The forty-nine-year-old Sarah Jessica Parker has an exceptional kind of perseverance and thereness. When I watch her, I don't feel I am watching an actress. Even in the many commercials she does, she just becomes a person explaining how a product worked well for her. I believe her.

I enjoyed Sex and the City. But I have a good friend who didn't like it because it was teaching her college-age daughter bad values about shopping, clothes, and relationships with men.

I love SJP to pieces. Like you, I find her so believable. I adored that movie with Steve Martin. Off the top of my head, I think it was called L.A. Story. She was fantastic as that nutty SanDee!

I am not thrilled with most of the movies she has been given of late and agree with you, it must be her looks that have held her back although she is also a very special type. I would love to see her get better parts and with more frequency!

I just watched her play an uptight professional in The Family Stone for the umpteenth time - one of my favorites - and every time I see that I think of what a polar opposite the role is to the one you described in L.A. Story - which I also love. She has real range, and I always find her performances engaging. Smart People is another great movie to see her in, if you haven't already.

Emily, Thanks for this marvelous feature... I really admire her and SATC was one of my fav shows (still is I guess)