GRUNTING AS U HIT A TENNIS BALL

Does it help the tennis player?

Some experts say it's a reflex. Others say its a tool. Sharapova, Monica Seles, and Serena Williams have been accused of doing it to deliberately to distract  their opponents. Back in 2009 Martina Navratilova said "grunting is cheating, pure and simple--it muffles the sound of the ball hitting the racket that opponents rely on as a cue." 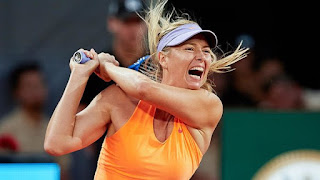 Researchers, exercise scientists, experimented. They got 20 students to kick a 100 pound bag while grunting, then, do it without grunting. A device attached to the bag enabled researchers to measure the force of each kick. They published the result: Students moved the bat with 9% more force when they grunted.

Other experts, after other tests, have said, "It is a reflex, rather than a conscious choice--during strenuous exercise, it's instinctive to hold your breath and give a grunt."

Planet Fitness, one of the largest fitness club franchises, bans grunting in its 1,500 clubs. They will revoke the membership of the persistent offender.

Does it bother me? Yes! I'm not a tennis-watching-nut like my husband, John Cullum, is. I watch the kids who rush in to grab the balls. I observe the audience. My mind wanders. The grunting definitely distracts me ... the truth is, it gets me thinking about the player's private life.

Hey, my tennis-nut-beloved, agrees. Watch this video -- what's your reaction?

I hate the loud grunting that weight-lifters do in the gym. It's supposed to be part of the technique, but it's against "gym etiquette."

Many years ago I took Tae Kwon Do. They taught you if you yell it gives you more power. I think it may be the same principle and why they do it versus muffling the sound of the ball. However it can be annoying after a while and sounds like they need a healthy dose of Dulcolax hahaha

Have always assumed it was a reflex. As each player got tired, it took more effort to place the ball where they wanted. I always had trouble converting a baseball swing to tennis and a grunt made it worse.
I stick to watching Grand Slam events.