I want to head for Geneva, Switzerland, and visit the small town on its outskirts, and see the Hadron Collider.

It sounds like an odd thing for the Cullums to be doing, but I've researched and written about it ever since 2012 when the Hadron Collider detected the "Higgs boson." Creating headlines all over the world, scientist Peter Higgs proved that there's one elementary particle, a "God Particle," that gives everything in the universe its mass. And also, everything about this topic fascinates my husband, actor John Cullum, who reads and re reads books by Stephen Hawking about black holes and the big bang.

Here's a photo of the Collider. 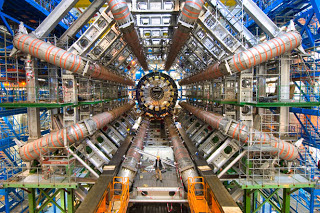 Note the tiny figure at the bottom in a dark jacket and brown pants, and you'll get a sense of the size of the world's most powerful accelerator. It's mammoth, overwhelmingly huge. Is it dangerous? A visitor receives less radiation than he'd get from dental Xrays.

Near the collider are live video feeds and a plaque summarizing its lofty mission: “To advance human knowledge, to continue an endless quest to learn where we come from and why the Universe is as we see it today.” Just beyond the plaque is the accelerator's tunnel. 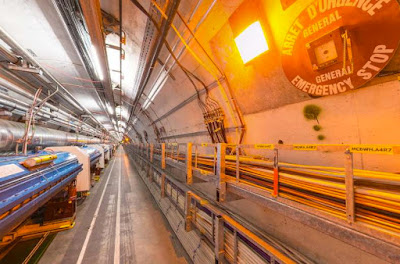 Though this 17-mile tunnel, the accelerator sends "subatomic protons" racing in an opposite direction, getting them to move faster until they're moving nearly at the speed of light. When the particles collide, they create tiny fireballs of pure energy. Doing this, scientists re-created the Big Bang and proved that the one particle Higgs measured and photographed forty years ago which showed it occurred at the same place, same time -- the "God Particle" -- does in fact, occur at the same place with each test.

Here's a photo of the "God Particle." 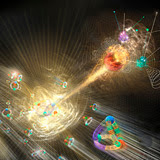 If I go to Geneva, will I continue to wonder, "Does the Higgs boson prove God created the world?"

We can't go there this year -- we're still dealing with Con Edison and renovating to get approval for using gas appliances, but maybe next year, or the year after. Someday, I've got to see the Hadron Collider, and find out ... feel out for myself what it means.

That's funny, because I want to see the Collider too. We were in eastern France one year, only a few miles from the Swiss border, and I wanted to drive over to Switzerland, but we never made it.

Very cool, Em. I share a love of Hawking's works, black holes and the why/how of the Universe with John and you.
Just to see the size of the collider will be something to experience!
Hope you get to go soon!