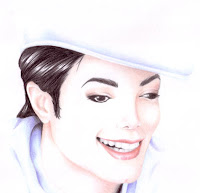 That sliding gliding backward step of his took him off our world yesterday ...

His music, and performer self ... extraordinary, influential, magically affecting ...

His personal private self -- his skin, his surgery, his playmates -- unexpected and shocking, hard to believe and understand, but somehow truthful unto him if not to us, so we the fans accepted what he did -- couldn't help peering and peeking and wondering, but sliding, gliding backed away ...

Respectfully ...? Yes. It didn't fit with what we thought was right behavior, but his commitment to what he chose to do, made it right for him. And that we accepted.

Michael Jackson always seemed to me to have much in common with his friend Elizabeth Taylor -- both of them un-brought-up children who grew into major influential adult artists.

I practiced, more than once, the sliding gliding backward step of his -- the camels step, his Moonwalk -- how many children, teenagers, adults, grandparents have tried to step-glide-slide backward like that. And who but MJ could create a song and an image and a feeling that became "We Are the World."
Posted by em's talkery at 5:40 AM