Wow. When I heard Sarah Palin was resigning as governor I was thrilled. With her pep, bounce, her bubbly feminine ways, this gal could wheedle her way into ... I don't want to say it out loud, I'll say it in a whisper ... into winning an election. She could construct, connive, instinctively find a bridge

, a route to the next group of up-and-coming conservatives who want to back-space/erase/ eradicate what's new, and revive all the old ideas of what Americans want to be and do. 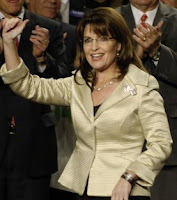 keep out of government and politics and what our President is doing.

(Yes.. I keep coming back to that. I don't understand all the issues that he is handling right now but the man we so joyously elected because of what he is, what he says, his bearing, his ideas ... I trust. If he's making a mistake he'll rectify it.)

I wrote a post "Green Olives" about the Count the Feathers in a Turkey contest I won.

Count the jackets ... how many? Twenty plus? Does that include the different shades in red, white and blue? I'm not a fashion nut. I just observe. I know one picks the clothes one wears because one wants to make the impression the color, the style conveys.

What about counting Hillary Clinton's pantsuits? Only once did I note the same suit worn twice, and that's because it was an elegant black velvet with a ivory trim around the high collar -- handsome and flattering. She looks sad, tight these days. Is it the state of the world -- Korea, Afghanistan, Pakistan..Iran -- how to handle whom, where, and do what? Or is it the state of her life? Hillary taught us by her demeanor, not to peer, wonder and imagine. But with the smiling, laughing and the loving exchange between her and Bill, charade or not, it was perfectly, believably played. They are a good couple, they interact, So I go along with what she/they/the Clintons want us to believe.

Not Palin. Write a book, SP! Travel! Be a celebrity. It's not what you wore, it's your ideas. Please don't be a leader.

If in fact Sarah Palin resurrects herself from the mess she made when she presented us with an improvised explanation of why she's resigning her post as governor -- oh my -- when she gives her next speech let's give her a ton of love, and applaud till we drown her out and shut her up.
Posted by em's talkery at 5:45 AM