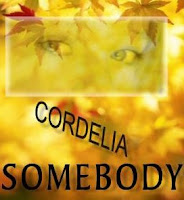 I keep expecting to get an e-mail from someone who's read "Somebody" on my Website -- a complaint.

(Actually, I'm hoping a reader will write me about this. I know from the stats on The Readery, that people are reading my books and downloading "Somebody," but I'm not getting queries from my readers.)

Why would someone complain? Because my heroine has two lovers at the same time. And not when she was young, (or wild and restless -- Cordelia never goes through that phase). But in her sixties, she begins a love affair, and in her seventies, while continuing this love affair, she begins a sexual relationship with the man whom she wanted to marry when she was seventeen. In her eighties and nineties, she is sleeping with two men.

Why did I create love affairs for my heroine at the end of her life? And write the sleeping together scenes, full-out describing the sex?

I wanted to make Cordelia a woman who's active in her old age; not just a grandmother, but vitally involved with what's going on the world. That's a personal dream of mine -- to keep going, to keep learning, building, doing, trying new things till the end of my life.

And my writing, as I've explained, isn't about me. But aspects of me are there, in the character. That's why I'm touting my work-harder-as-you-grow-older ethic. (I haven't studied Calvinism, but I've been told many times, it's a Calvinistic idea)

Cordelia's two lovers are men she's known for many years as dear friends. Toward the end of her life each of them, in a different way, provides her with sexual pleasures, and supports her continuing her work as a congresswoman and editor of a newspaper syndicate.

Her two lovers know about each other and become good friends. All three characters are enriched by their relationship with one another.

Even as I'm explaining this, I enjoy the idea -- lovers, fun, excitement -- I'm saying to myself and to you, the reader -- do what you have to do in order to look forward to each day, to enjoy your time on the earth.

Here's where you'll find the two lovers, and the beginning of the "sex" writing. Take a

Email ThisBlogThis!Share to TwitterShare to FacebookShare to Pinterest
Labels: health, private self, writing