I bit them. I wore scarlet red nail polish,. I peeled off the polish. I bit them.

I resolved not to bite them, and bit them. I bought a fancy nail file, and cuticle scissors, and shaped them. I bought myself a pale pink nail polish. I applied it. The next day, I peeled it off.

I had a manicure at a beauty salon. I didn't enjoy trying to make conversation with the manicurist. The way she filed my nails hurt. Nevertheless, I made a second appointment. The next day, my finger was fevered and painful. I canceled my appointment, and never went back.

I bought fake nails and glued them on. Hated them.

I went with D an actress friend to a fingernails place. We each paid $60.00 for a set of fake nails. Mine were lovely for about a week. When D broke a nail, I went back with her to the salon, and watched very carefully as a new nail was created.

Afterwards we had cocktails. The chic things we chatted about made me uneasy. D's elegant expensive exclusive look, made me feel put together in my Filene's bargain wardrobe.

(Fingernails went with gadding about, and I was maybe 30% committed to gadding about. I didn't know what my next project was, and while JC was coming up up up in the world, I had a feeling I was teetering down down.)

At a beauty supply shop I bought fake nails powder, the two liquids that are needed to harden the powder, a roll of nail shaper papers, and a small electric nail filer (like a tiny power drill). Also application brushes and tweezers for removing the shapers.

Then, slowly, carefully, I created a thumbnail. And practiced, and practiced, till I could make ten professional looking nails.

They looked good. But within a week my fake nails began to develop greenish moons at the cuticles. By the middle of the following week, the whole nail was green.

Even so, though it was time consuming, I kept my unnatural nails perfectly manicured.

A filmmaker phoned. He'd seen me dance my "Four Seasons" solo and said he loved it. He suggested a lunch meeting, saying,"There's something important I want to discuss with you." 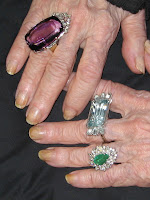 I wore my ankle-length black jeans skirt, a studded black jeans jacket, and a purple (for good luck) shirt. With my three favorite Liz T rings, (see my post "Elizabeth Taylor Socks Syndrome"), and freshly fake nails, I felt glamorous. Entering the crowded chic restaurant, I was delighted to notice people noticing me.

After we ordered, he asked what I was doing. Though I was in the doldrums, between projects, between forkfuls of salad, hoping he'd interrupt and tell me what the important something was, I described "Zinnia," a two character play I'd been writing.

Finally, he put down his fork, and said, "The head of PBS and I would like you to be the fund-raiser for our new dance film foundation ..." and mentioned yearly salary, my own office, my own secretary ...

The conversation became ah ... oh ... yes ... mm ... How I got home, what I said escapes me. Did I turn him down gracefully? Probably not. I've never heard from him again.

What I do remember is ... removing the fake fingernails, dumping the powder, the liquids, roll of shapers, and hanging the black jean skirt and jacket in my closet where I keep clothes I'll probably never wear again.

Was it the next day, or two days later that I was back in my studio ...no rings, on my fingers, no bells on my toes. I had music -- Mahler's Tenth. I had "Zinnia," I was me again, unadorned, self propelled -- with a project I loved working on.
Posted by em's talkery at 5:57 AM