Celebrities, famous people, are always surprising when you are face-to-face with them. It's the larger-than-life image on the screen, the visions of him or her on television, the articles about them in newspapers, and the books about them that make the name/the face historical -- unreal.

I arranged a meeting with Leonard Bernstein. (Practiced pronouncing the last syllable of his last name STINE, not STEEN -- even now I hesitate -- which is it, which was it?)

The second time I was employed by Green Mansions, (resort in the Adirondacks where I had my first job -- see my post "Hoard the Vanished Brand" June 6), I'd created some of the staging for Bernstein's chamber operetta, "Trouble in Tahiti."

Mark Ryder and I were the dance team in residence. I'd worked with the leading lady on her big song --"There is a garden ..." It was a fascinating aria -- confusing libretto, but I loved the music.

The Frankel-Ryder Duo (or Ryder-Frankel Duo -- we were already arguing about top-billing), had just been discovered by the IN culture groups in New York. So it wasn't difficult to get one of our new friends to set up a meeting.

Leonard Bernstein was lying down on a couch, when we came into his study. "Hi" he said.

Shock! When he stood up he was gorgeous -- even handsomer than he looked in the pictures -- bare feet, green striped pajamas -- but gee -- very short.

s later, when Richard Burton and Elizabeth Taylor were the media King and Queen, Lennie often came backstage for "Hamlet." Richard and JC rehearsed their onstage duel before every performance. Duels, even with blunted swords, are dangerous. Hume Cronyn and I were in the corner watching, Liz was at the mirror, powdering, checking herself.

Into the dressing-room strides Lennie. Richard freezes. JC moving in for a thrus 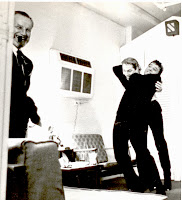 I strangled the laugh that welled up in me with a quick coughing fit. Lennie, Dickie kissed -- it was an extravagant, marvelously strange, huggy-kissy kiss on the lips. (Hey, in show biz, kissing on the lips, even passionately, doesn't mean what it means in the ordinary normal real world. )

Lennie dropped in quite a few times. Sometimes before the show -- always with Leeeniee! Diiickee! I got used to it. ( JC and Richard didn't kiss but they often hugged and danced around.) After the show, we'd go someplace for drinks with the various celebrities. (Holy cow, says that part of me who acts like it's nothing -- night after night, everybody who was anybody showed up!)

Liz was in her yellow flowers in her hair phase. I don't remember her outfit, just the black curly hair, the flower, and that marvelous, uniquely beautiful, perfect face -- lavender eyes with that thick fringe of perfectly mascared lashes.

Okay, back to the Frankel-Ryder story -- Lennie gave us permission to work on a "Trouble in Tahiti" ballet. Alas, it didn't happen. Maybe as novice choreographers we just couldn't figure it out. The construction of the music was based on a libretto that didn't lend itself to a choreographic version of the plot as a duet.

My partner and I went on to other things. My "Haunted Moments" ballet to sound effects caught the attention of composer Walter Piston, at Julliard -- there was a flurry of almost-but-not- quite collaborations.

I never did manage to put my meeting with Lennie in a novel, though Cordelia cancels her interview with him in "Somebody" Book I, chapter 27, Installment 4. p. 475, "Mrs. Wife."

Anyhow, DVD's of Lennie's passionate conducting -- the cajoling, powerfully evocative way he demonstrated the emotion he wanted his orchestra to convey -- Bernstein's recordings of Mahler and Beethoven, are unforgettable.

Years later, after Bernstein's wife was gone, we heard the rumors about his sexuality. It was a time when everyone wondered about what everyone else did or didn't do. Most of the celebrities we palled around with, were talking about "playing it both ways."

A young conductor with whom we were creating a musical told us about his meeting with Lennie. "Sad lonely, guy no family around -- the poor guy made a pass..." The casual, cruel picture our young friend painted made me want to weep -- the handsome, gloriously passionate Bernstein exciting a 90 piece orchestra, begging a young man to stay the night ...

Yes, as we ourselves were growing up and growing older, we've heard and seen other sad stories -- inside, behind the scenes, some very private stories that maybe I'll share in some other posts.

The other night we watched the movie "West Side Story." Knowing all the creators, the original cast, seeing the stunning film Robert Wise made ... (He came here, took measurements of my studio, photos of the bars. the floor, the mirrors, close-ups of yellow-pad of dance notes that hangs on the cork board -- used my studio in his "Two for the See Saw" film ...) Enough with the name dropping -- what stays with us, even with all the personal, irreverent, hodgepodge of memories, is the music for "West Side Story" -- the towering talent of Leonard Bernstein the composer.
Posted by em's talkery at 5:31 AM

Funny - I just rented the WestSide Story movie. It's sitting on my desk waiting to be watched. Coincidence? Or did we both hear something on NPR that caused us to think about seeing that movie again?
I went to the original show on Broadway when I was about 12. I have never ceased being thrilled by that music. There has never been anything quite like it.