I like remembering BETTE DAVIS' acting, the various women she played. I can watch any of her movies again and again and not get restless. No other actress has taken Davis' place, in my mind.

Thinking about her -- there he is -- a twinkle-twinkle littler star -- the unpredictable CHARLES GRODIN, comic, villain, brilliant conniver, commentator on "Sixty Minutes" -- like an arrow, taking aim and hitting the bulls eye.

Wait a minute ... when was the last time I went to the movies? In Malibu? Was it after they divided the big theater into three always crowded smaller ones? I definitely didn't like sharing an evening with strangers opening candy wrappers, whispering, responding, affecting my own response.

Gee, golly, my goodness, where am I heading in this ramble? Am I writing about "stars" whose work I love? Or old habits ... like going to the movies?

And the period in my life, the time when I knew the "names" -- in movies, dance, theater, also painters, and who was who among the socialite celebrities. Lately, I more or less retain the most often repeated names, but all that personal junk about who's doing what with whom seems utterly unimportant.

Being a daily blogger -- I've been putting down ideas, random thoughts, possible things I might want to write about ... So the other night, after I saw him introducing films on TCM (Turner Classic Movies), I put down WILLIAM BALDWIN -- he's always interesting, and at the Tony Awards recently, introducing "Best Actors," he said seeing John Cullum in "Shenandoah" inspired him to become an actor.

I put down SEAN CONNERY -- saw him again in "Dr. No," and again enjoyed his swashbuckling handling of the intricate, verge of horror, shocking disaster that could have destroyed the world.

Even so, I obviously haven't revved up enough energy to write about Connery, Baldwin, Grodin or Davis because ... well, thinking about them reminds me of the time when I was affected by actors and movies and, like I said a minute ago, I'm not there anymore.

Star gazing is for looking up at the night sky, and being aware that there are NO STARS in the night sky that hangs over New York City. 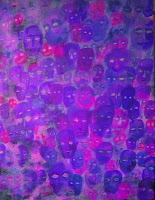 Yep, faces. Kind of ghostly looking. Not a pretty picture.

My sky is filled with faces of people I know, knew, friends, and momentary acquaintances I liked a lot/didn't like at all, had confrontations with -- some with whom I had marvelous rapport, worked with, employed, spent time with ... when? where? why? Sometimes I remember and sometimes I'm not sure -- they come and go, but they're there ... part of my life.

No, I don't look up and whisper Star bright, star light, first star I see tonight. I wish I may, I wish I might, have the wish I wish tonight -- because wishes are for kids, not for me ...

But, I do think not softly, quite loudly inside myself, I wish I may, I wish I might NOT be so aware -- aware every day, of time passing faster and faster ...
Posted by em's talkery at 5:02 AM