It was around midnight, a cold winter Saturday night. The building was empty except for me. I heard footsteps.

Someone had already broken into our 4th floor loft a few weeks earlier. There were chisel marks around the lock. It had been pried open. A tape recorder and TV were stolen, also a bicycle, in the lobby bike rack. The police lieutenant had said "There's robberies all the time around in this area -- probably an addict, not much we can do about it"

Our street was a business neighborhood, no one lived in lofts, most offices and factories were closed on weekends. (This "adventure" happened a few years before we bought the building.)

My doors were locked but whoever it was, could be heard coming up the first floor stairs ... second ... third ... our stairs. I wanted to call out "Who's there?" Was afraid to. Someone knocked on the studio doors. Hard. Then again, harder.

JC was in Boston in Richard Burton's "Hamlet," playing Laertes -- suffering because director John Gielgud had said "play Laertes as if you're wearing a pink shirt," and partying nightly with Burton, Gielgud and the celebrity cast.

The knocking stopped. Whoever it was retreated. I heard them going down the stairs.

Breathing a sigh of relief I picked up the phone to call JC ... heard the footsteps again. The person banged on the other door. It sounded like the door was being hit with a brick.

I was scared (trembling scared). There was more noise in the hall. Then a hammering sound. No doubt about it -- someone was pounding with a hammer. The door resonated -- there was a two- foot square thin iron plate in the center -- a wood door frame around it. The frame was splintering.

Phone in hand, I opened the fire escape door, got out on the fire escape. I was in rehearsal clothes (leotard and tights). It was freezing. My bare feet felt as if they were sticking to the steel platform. The banister was icy.

Could I get down the fire escape steps in bare feet, in the dark? The first floor steps were folded up and required weight on them in order for them to drop down to street level.

Would my hundred-and-three pounds do the trick? If I got to the street, where would I go? There was a gas station on the corner, but I wasn't sure it would be open.

I phoned the police.

Shivering, on the icy fire escape platform, I had a hard time saying my name, my address, and explaining "Someone is breaking down my door."

After about ten minutes (long minutes), watching the street from four stories above, I saw a police car turn the corner. I saw a man in a blue wool cap go down our front steps, turn left and walk to the avenue as the police pulled into our curb.

Re-opening the fire escape door, I peered into my home and saw our door with the iron plate jutting out of the bent, splintered, wood frame. The man in the blue cap couldn't have come in without more work or another tool.

A voice in the hallway called, "It's the police. Lady, you in there?"

Still holding the phone, not sure I was safe, I grabbed the bread knife and I unlocked, and opened the studio door.

Two young-looking cops in uniform, holding their guns came in. Talking about the weather, they went through the studio, dressing rooms, kitchen, bathroom, closet, and bedroom.

When they were finished checking, one said, "What's a nice-looking girl like you doing alone here on a Saturday night?"

His buddy took the bread-knife out of my hand, put it in the sink and asked me if I had a husband, was the loft my residence? When I told them about the previous robbery, and the man with the blue cap who'd gone down the front steps as they were arriving, they shrugged.

They said, "He jimmied the lock on the front door. It's wide open. Better get it fixed first thing tomorrow. The guy in the hat saw the us. He probably won't be back. If you hear anything give us call. After another "... nice looking girl like you shouldn't be staying here alone," they left.

JC in Boston couldn't return till after the Sunday night show. He got me to phone two of my men dancers, and told me what to tell them to do. Diane and her boyfriend Vic arrived.

Vic (a tall, strong, farmer type who couldn't dance very well, but looked great on stage), went to work, nailing a sheet of plywood onto the battered door.

Diane pressed me to come home with her. But I couldn't leave everything I owned, not with the front door to the building wide open.

So, Diane, Vic, and I moved things into the hall -- put the piano at the top of my steps, a large mirror, pile of books, dishes, set of drums, guitar, costume trunks. On their way out, they repositioned everything -- nobody could climb up the stairs without making a lot of noise.

I didn't sleep that night. Or the next night-- I could only cat-nap.

Monday, JC, a carpenter, a janitor from next door, the electrician who rented the basement, fixed the front door, installing double-locks and a buzzer system. 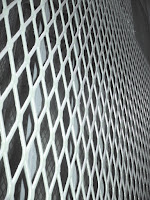 In the yellow pages I found two brothers who made steel gates.

They installed a floor- to-ceiling mesh wall and door with a special lock.

Why am I telling this story? The robber in the blue cap got busy dancer, choreographer, Em into a renovations mode, that got me into my nesting phase -- painting pictures, having a baby, making a the home sweet home that you can visit (see posts -- "Painting Cities," May 20; and "Gallery." June 29.).

Click and you'll see how great it looks nowadays.

Email ThisBlogThis!Share to TwitterShare to FacebookShare to Pinterest
Labels: renovations