Dancers called him "Mr. B." He was probably the most important name in ballet of the 20th century.

I was nervous, excited, all fluttery inside, when Todd Bolender, the choreographer, said he was bringing George Balanchine and Lincoln Kirstein, fund raiser co-founder of the NYC Ballet, to my studio to see "At the Still Point."

My studio, in those days, was on the top floor, separated from our living quarters by blue plastic shower-curtains. The floor, which I'd labored over with sandpaper and beeswax, to tamp down the splinters in the wood, was carefully checked for slippery spots. 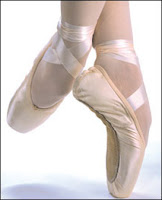 I was in point shoes (pink toe shoes), and slipping was dangerous, especially when you're used to dancing in plain old ballet slippers.

Wow, toe shoes -- that was brave of me -- I did it for Todd with whom I was in love (the way dancers fall in love with the man who tells you what to do, praises you, criticizes you, directs you). And of course, that was part of what upset my husband at the time, my partner Mark Ryder.

Mark, who bent over backwards to show off his masculinity, to display the rough, tough, muscular guy aspects of himself, did not like Todd who was homosexual and talked a lot about his roommate. At our first meeting with Todd, his roommate served us espresso in exquisite demitasse cups, with tiny spoons, lemon peel on the saucer, and dainty napkins.

In our rehearsals with Todd, on the breaks, my husband stormed off through the blue plastic curtains to our shabby, undecorated living quarters -- bed, a mattress on a board on bricks -- bookcases, boards on bricks -- dining table, chairs, lamps, all discards Mark scrounged from the street.

Mm ... Writing about those days ... My eyes don't feel with tears, but tears are somewhere in and around my brain and heart -- tears for the strong, arrogant, confident, young selves of ourselves in those days.

We'd toured, we'd been successful as a team, but irritation -- basic conflicts -- were developing. (My mind keeps searching for a way to clarify what was going on behind the work scene in the studio -- to explain why and how Todd and Todd's world became the beginning of the end of my first marriage.)

Anyway, there George Balanchine and Lincoln Kirstein were, seated on the bench next to Todd.

I don't remember any social preliminaries. I just danced. I was deep into the feeling of the piece. Lonely girl, other girls with partners ... Girl painfully alone, haunted by her longing to join in with the others as they waltz off stage, enjoying themselves ... Manly handsome man appears ... Girl and man discover each other in a tender, adagio duet ... Other couples return and man connects with them, gradually becoming part of their celebration, leaving the girl, once again, lonely, alone.

I'd written the libretto and picked the Debussy music. Todd transformed it into a ballet that's in the repertoire of quite a few ballet companies. As "Still Point," it's performed with just three of the movements.

As I said, I just danced. Todd's choreography did it -- transported me into the moment by moment feelings, the progression of the dance and the unfolding drama. The steps didn't scare me, not even the turns á la seconde that Todd used (a man's series of turns with an extended leg that ballet audiences often applaud). I just danced, and Balanchine and Kirstein were touched by it.

Well, the repercussions of that performance continued for a very very long time. We were invited to perform as guest artists with the New York City Ballet, after they mounted the Still Point. Tanaquil LeClerc and Melissa Hayden came to studio, and again, we performed it for them. I worked with Tanaquil and Melissa, and taught them my role.

It was exciting, more than a exciting ...

It was as if a beam of sunshine was on me, following me around. As a little girl, I'd often imagined that my life was movie, and a spotlight was on me -- the eye of the camera was watching and a film was recording the moment by moment events of my life.

I'll bet if I went to my QuickFinder search file, and searched the word "ballet" -- wow -- how many, many times have I written about my childhood dreams, my deep and current, intense connection to dancing.

I didn't dance as a guest artist with the New Ciry Ballet, but I almost did.

Or a couple of tomorrows from tomorrow -- sometime later when I can write about all this freshly.
Posted by em's talkery at 5:10 AM

This is a wonderful story. And, as usual with your writing, I can picture the scene very well.