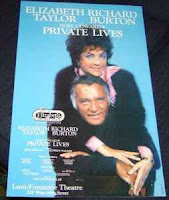 The news about Liz and heart surgery sends me back to our "Private Lives" days, and how her private life intersected with our private life.

The very first novel I wrote, "Ribet Affair," was about Elizabeth and Richard, and a wacky boy who's infuriated by the intense media coverage of their romance and extravagant lifestyle, planning to bomb the theater which Elizabeth visits every night while Richard's performing there.

JC was one of Richard's favorite buddies in Toronto, where here was playing Laertes in Burton's "Hamlet" that was directed by John Gielgud. When I showed up, I was immediately part of the fun and games -- cocktail parties, dining, drinking and carousing with the famous lovers. They were besieged by paparazzi, followed by hoards of fans.

Being part of Richard's inner circle from his "Camelot" days, I'd sat with Sybil and chatted with her, during some of the rehearsals. Her situation with her husband pained me.

During "Camelot," Richard was having an affair with one of the chorus girls -- a beautiful girl whom I vaguely knew. When I phoned JC from Michigan (I was on tour with my dance company), she'd answered our phone -- the bedroom extension -- in a sleepy voice, sounding like she just woke up.

It was a shock.

What did it mean? Did it mean she was sleeping in our bed with JC? Or was she on a sleep-over with Burton?

Richard and JC were a dangerous pair.

The carousing and craziness of their partying continued after "Camelot," in Philadelphia, Chicago, and Los Angeles with me on the outskirts -- I was on another one-night-stand tour, wondering, worrying, agonizing about JC, knowing about Richard's affairs with other girls, wondering about Sybil, and my situation -- not sure what was real.

Not sure what was real ... It's a state of mind that happens when you love your husband, and you're not sure if he's playing around. (See my post 'Edwards Infidelity 5/26).

I remember Richard and Liz on their wedding day -- her coronet of daisies, her too tight, too shiny, too bright, yellow dress, the champagne, the exhausting non-stop celebrating in the Prince Edward Hotel in Toronto. And more, many more get-togethers. (See my post: "Elizabeth Taylor Socks Syndrome" 6/11.)

The Burtons fought and re-united, their other lovers were headlines. After their divorce, their re-marriage and a second divorce, JC signed a contract to play a featured role in "Private Lives," the Noel Coward play which Elizabeth and Richard revived for themselves.

After many weeks in Toronto and Boston (the cities where "Camelot" began), and 138 performances at the Lunt Fontanne Theatre in NY, "'Private Lives" closed.

The gift from Elizabeth was delivered by a messenger . It was a large fancily wrapped box. Presents are given by cast members to each other on opening night, but this present arrived months after "Private Lives" was over and done with.

It hadn't been a happy show -- bad reviews (but sold-out houses) -- new director, new costumes, new black curly wig for Liz (she'd been wearing red-brown hair that didn't suit her). And re-staged scenes, which upset Richard . He was ailing. Doctors said drinking was killing him, but he was drinking more than ever, sleeping with two actresses that I knew.

Liz performances were up and down, as was her weight, and her love life -- she was going steady with the producer, and sporting a gorgeous engagement ring from her fiancee, a wealthy Mexican lawyer. When she missed three performances, Richard refused to perform with her understudy, and out of the blue married his secretary, Sally.

The story behind their facades, and what happened with Sybil, was loud and in my mind when we opened Elizabeth's gift.

It was heavy. A pink satiny-cardboard box inside the fancily wrapped larger one.

And inside the pink one, beneath cotton, wrapped in a white silk cloth -- Elizabeth's face in a heart-shaped, silver, heavy, solid silver 11" by 9" frame.

There was a note, scrawled by Elizabeth, thanking JC, with love and kisses.

A gift for our mantelpiece? For JC's desk? For a table in our living room, loaded with pictures of 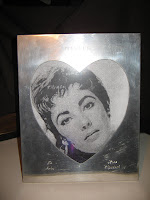 We didn't have a table (still don't), but the gift is unique -- engraved -- silver -- heart-shaped -- that exquisitely beautiful face -- who in the world would have thought of sending a picture of herself except Elizabeth Taylor.

I hope, sincerely hope, that she's okay and the surgery will work for her.

It's a gee whiz time, whenever I think of Elizabeth Taylor. . A time when I am deeply aware of what it meant for us to be in her world, on the outskirts -- yet in it -- fascinated, intrigued, distracted, pulled in wrong directions, but holding on to "US.
Posted by em's talkery at 5:13 AM

Your post brought tears to my eyes, the honesty of expression of your emotions without judgement of others and your own experiences and struggles as well as theirs in the journey of their and your lives.

Thank you for sharing your life and memories in such a genuine way and the importance of not losing 'US" in the tsuris of the journey.
Brilliant!!!! Thank you.