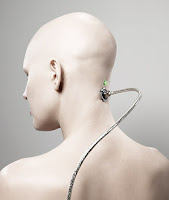 This subject is too large for me.

Brace yourself. I'm tossing the word at you to catch it and run with it if you can. The word "singularity" in astrophysics: refers to a point in space-time — for example, inside a black hole — where the rules of ordinary physics do not apply.

Singularitarians (people who accept the concepts of Singularity) believe the rate at which computers are developing indicates that by 2045, artificial intelligence will, by far, out-do human intelligence.

They believe that "Artificial Intelligence" will determine how to cure the "disease of aging" and the "disease of death," and much, much more -- so much more that it will be a world that you and I no longer fit into.

Raymond Kurzweil, who's been writing books about Singularity, warning us, telling us, teaching us about it, has impressive, credentials -- 39 patents, 19 honorary degrees, and awards. Bill Gates said "Kurzweil is the best person I know at predicting the future of Artificial Intelligence."

Kurzweil's thinking boils down to Moore's Law in physics, which proves that the number of transistors you can put on a microchip doubles about every two years. It's a surprisingly reliable rule of thumb. No matter how Kurzweil and others work the numbers, the speed at which computers are gaining power and intelligence clearly tell us that Artificial Intelligence will be able to handle advanced mathematics and science, appreciate art, compose music, drive cars, write books, as well as make ethical decisions. What we are today -- our "species" will not fit in with what the world will be in 2045.

Throw up your hands and stop reading this if this seems preposterous. This is currently being studied at the three-year-old Singularity University in Silicon Valley, currently sponsored and run by NASA. Google was one its founding sponsors. Why are Google and NASA involved? Because once we create an ultra intelligent machine, it will design better machines -- therefore the first ultra intelligent machine is the last invention man needs ever to make.

Another major name in Singularity is Aubrey de Grey, British biologist with a doctorate from Cambridge, one of the world's best-known life-extension researchers. He's working on regenerative medicine, and runs SENS (Strategies for Engineered Negligible Senescence.)

Dr. de Grey views aging as a process of accumulating damage, and says the idea that death is an immutable fact of life "is childish, ridiculous," -- the human body is a machine that has many functions, and it accumulates various types of damage as a side effect of the normal function of the machine. Damage can be repaired periodically. Dr. de Grey says that medicine consists of working on what looks inevitable until you figure out how to make it not inevitable.

Of course, there are people who think Singularity is science fiction, fantasy, wishful thinking. Serious critics focus on the question of whether a computer can truly become intelligent. The kind of Artificial Intelligence that Kurzweil is talking about doesn't exist yet and it's possible that it won't.

Singularitarians are waiting on that exponentially growing computer power to get here. But it's possible that there are things in our brains that are too complicated -- human consciousness may be too "complex and analog" to replicate.

Even though you might agree that Singularity is plausible, there are unanswerable questions -- the biggest one -- by beating death will we have lost our essential humanity?

Are we heading there? Five years ago, we didn't have 600 million humans carrying out their social lives over a single electronic network -- Facebook. Five years ago, you didn't see people double-checking what they were saying and doing by using handheld network-enabled digital smart phones.

Is it an unimaginable step to take the smart phones out of our hands and put them into our skulls? Already 30,000 patients with Parkinson's disease have neural implants. Google is experimenting with computers that can drive cars. There are more than 2,000 robots fighting in Afghanistan alongside the human troops. Jeopardy, the game show, is getting an IBM super-computer nicknamed Watson which, in a practice session, got every question it answered right, and did not need help understanding the questions which were in plain English.

Kurzweil points out that your average cell phone is about a millionth the size of, a millionth the price of and a thousand times more powerful than the computer he had at MIT 40 years ago. Flip that forward 40 years and what does the world look like? Are humans obsolete?

What do I think? I'm summarizing what I read in a 5 page article in a recent Time Magazine, I wouldn't be summarizing it if I didn't think this was an important, urgent, something with which all of us need to be concerned. Here's a link to "Singularity," the cover story in Time, 2/21/2011.
Posted by em's talkery at 4:00 AM