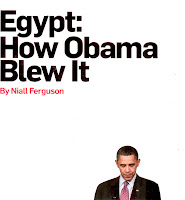 <-----------Cover of a recent Newsweek Magazine, promoting the cover story -- "WANTED A GRAND STRATEGY FOR AMERICA." It's by their new columnist, Niall Ferguson, published author, media personality, Professor of History and International Affairs at Harvard and the London School of Economics, currently teaching "Western Ascendancy" in both places.

In my play, "Shattering Panes" the Cat character complains to the Dog -- "Always getting name-blamed, name-raimed" I mention it because it's a good play -- because our current, every-day-more-popular pastime seems to be the Blame-Name Obama Game.

So what did Professor Ferguson say?

He presented his opinion, step by step, of what Obama did during the three weeks of Tahrir gatherings, and concluded --"Obama jumped up to grasp a historic opportunity and missed it completely."
And elaborated:
"Obama could have caught the wave, supported the youthful revolutionaries, or do nothing. Obama did both — some days exhorting Mubarak to go, other days recommended an 'orderly transition.'”
And concluded:
"The result -- a foreign-policy debacle. Obama alienated everybody: not only Mubarak’s cronies in the military, but also the youthful crowds in the streets of Cairo. Whoever ultimately wins, Obama loses."
And explained:
"The alienation doesn’t end there. America’s two closest friends in the region -- Israel and Saudi Arabia -- are both disgusted. The Saudis are appalled at Washington’s failure to resolutely prop up Mubarak. The Israelis are dismayed by the administration’s apparent cluelessness.
And concluded:
"Tragically, no one knows where Barack Obama’s map of the Middle East is ... worst, he has no map at all."

I think the article is insulting, incorrect, and promotes the Professor's politics. Yes, I've deliberately expurgated the Professor's educated, well-constructed reasoning which proves to the magazine's readers that Obama is a flop as our President.

Other highly respected columnists pointed out that Liberals, naturally, saw much to praise in Obama's actions, and that conservatives found Obama's performance more than adequate, especially as the crisis reached its climax. Bill Kristol, speaking on Fox News last weekend, said that Obama ended up in the right place, and John Boehner told David Gregory, "I think they've handled what is a very difficult situation, about as well as it could be handled."

Yes, I'm very angry about the cover of Newsweek. So, revengefully, I'm tossing in a bit of juicy current gossip about the Professor.

New York Magazine recently headlined, "Ferguson leaves wife of 16 years with whom he has three kids, for Somali Intellectual Historian." The article suggested, not subtly, that his decision was typical of Ferguson's personal pursuit of hotness, and fame. The lady is a spectacular, Somali-born, Dutch-educated lawyer and former MP, author of a best seller memoir, "Infidel," and has a giant tattoo of passages from the Koran on her back. The article reminded the reader that Ferguson is, himself, "Hot." He's good-looking 46, and guests on Glenn Beck's show, often fueling Beck's anti-Obama attacks.

Another tidbit I found explains that back in 2008, Niall Ferguson was a John McCain supporter.

So I am blame-raiming-naming Professor Niall Ferguson. He won't shut up. And like the Cat in my play, I'm meowing, allowing myself a catty loud complaint.

Way to fight back! i just read an article about how the rich Wall Street characters have avoided jail time.
How amazing to carve out a place of privilege in the academic world or the big money world and be "King of the Hill, Top of the Heap!"
Thanks,
David

I can't stand Niall Ferguson. I hope he is not a sign of things to come at Tina Brown's Newsweek.

Slightly off subject...but anything that they can throw at Obama they will...I just saw this on Huffpost: http://www.huffingtonpost.com/2011/02/25/newt-gingrich-obama-impeachment-palin_n_828506.html

I am disappointed in Obama for a number of things, but still think he is doing an over all great job, given all he has inherited and all that has been thrown at him.

Hello there! Do you use Twitter? I'd like to follow you if that would be ok. I'm definitely enjoying your blog
and look forward to new posts.

Feel free to surf to my web page; click through the up coming web site