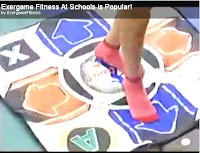 See the feet in red socks that are stepping onto that pattern? It's an exergame, an easy, fun way to keep fit.

(If you are a regular person, not a computer/cell phone "app" nut, GAMES are a biggie-big thing in LIFE, sort of like ...well ... a major addiction, like marijuana, liquor, sex.)

Oh c'mon, please -- is this true, or is it media news -- a hyped-up fact that the media can develop into a day, a week of news alerts, and revelations?

My instinct is keep-fit-with-exergames is BB, (my acronym for bull- baloney).

Visiting exergames.com I saw their latest new game --"The Horsepower Challenge.” Users buy pedometers for their shoes. Your numbers are wirelessly uploaded to the game while you're playing. You get warranties for the software and electronics. I clicked "lowest price" but no price appeared.

Wondering what doctors thought about exergames, on medpagetoday.com, I learned that tests were done using 39 Boston children. They were volunteers -- no overweight kids or kids who hate exercise were tested. The kids had a ball with the games for approximately 10 minutes (not the recommended 90 minutes). The medpage experts sort of nodded -- exergames were good workout, but whether they provided "fitness" couldn't be determined.

Here's the background story about exercising with electronics. Back in the 80's there was a surge of interest in "virtual reality," talk about Nintendo toys, various gizmos, and Nintendo entertainment systems. During the 90's, Microsoft, Sony, and other manufacturers began to use sensors attached to various machines. Treadmills, bikes, and do-it-all machines provided automated feedback to users, but it was expensive and more or less dropped.

Around 2003, the "gaming bike" caught on, and Nintendo's "Wii, " which inspired other software folks to develop more game-products for kids and adults -- fancier, better, various priced gaming devices that have evolved into Microsoft's Xbox 360 and Sony's PlayStation 3 and 7th generation Wii.

"Gamericize" technology is now very much in vogue. Neuropsychologists and medical specialists. are advocating that you vitalize every aspect of your cognitive, psychological and physical health.

The British Medical Journal, a well-known international authority on the subject, says Wii games use significantly more energy than playing sedentary computer games, but the energy used is not of high enough intensity to contribute towards the recommended daily amount of exercise in children. (Oh ho -- my BB bell is tinkling.) And the Journal included exergames, the Xbox 360, PlayStation 3 in their report, and all the latest games which superimpose animated objects to be punched, kicked, or otherwise interacted with, over a video image of the user.

Yes, it looks like fun, And definitely keeps the kids happy, busy, and bouncing around. But it is not exercise that will make young people truly fit or give them a fitness knowledge, and a "keep-fit" religiously followed routine -- a philosophy that will grow up with them, as they grow up.

I was given a Wii a couple of years ago and I've had great fun with their fitness exercises and games as well as the "Just Dance" and Dance on Broadway" games. I don't expect these games to fully fill my need for exercise...they are simply lots of fun and another way to try to keep my aging body supple (especially when the weather is too rainy/too humid/too hot to do my usual outdoor walking, swimming, etc.).